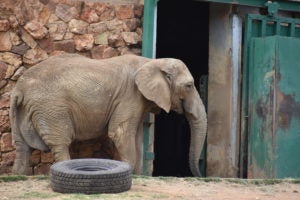 Johannesburg – Humane Society International/Africa has reacted angrily to the news that Johannesburg zoo has purchased two new elephants to introduce to lone elephant Lammie, instead of heeding the advice of some of the world’s most respected elephant experts by releasing Lammie to the relative freedom of an awaiting rewilding sanctuary.

Video emerged yesterday of the elephants, a 21-year-old male named Ramadiba and a 19-year-old female named Mopane, who were purchased from a captive facility in the Eastern Cape. This addition of the elephants has gone ahead in defiance of a global plea to #FreeLammie, led by animal protection groups Humane Society International/Africa, the EMS Foundation, Elephant Reintegration Trust (ERT) and Ban Animal Trading (BAT) since last year. The groups called for Lammie to be allowed to live out her remaining years in the freedom of an extensive protected sanctuary with another herd of previously captive elephants, after her mate of 37 years died last year.

HSI/Africa’s Wildlife Director Audrey Delsink, said: “We are furious that instead of doing the right and honourable thing for Lammie by giving her freedom in a vast sanctuary with a new elephant herd, Johannesburg Zoo has forged ahead and brought two new elephants for Lammie to share what remains of her life in captivity. Such was their haste to acquire these elephants, they have done so without completing any of the expansion or renovation work they promised and ignored both public opinion and the pleas of some of the world’s most eminent elephant experts and conservationists. The Gauteng Legislature has also utterly failed to respect the wishes of the 301,652 petitioners who called for Lammie to be released. Johannesburg zoo claims it acted legally but the question is has it acted morally, and from Lammie’s point of view the answer is no. This decision denies Lammie, and the two new elephants, the chance of a decent, fulfilling life. This sorry episode has exposed the zoo authorities as lagging far behind global trends to close elephant zoo exhibits, something that 150 progressive, modern zoos have already done in recognition of the inescapable fact that such captivity cannot meet elephants’ complex physiological, psychological and social requirements. Johannesburg Zoo may well have acted on the right side of the law, but they have found themselves on the wrong side of history.”

The animal protection groups had stressed concern for Lammie’s mental well-being. Lammie showed signs of significant grief and trauma and it was advised that she spend her remaining years free from confinement, in an environment where she can thrive emotionally and physically with a group of elephants who would become her new family. Despite HSI/Africa, EMS, ERT and BAT’s efforts, as well as a global petition garnering 301,652 signatures, public protests outside the zoo, a formal letter signed by 13 of the world’s most eminent elephant experts and conservationists, international media coverage and hundreds of hand-written letters requesting Lammie’s freedom, the zoo refused to let Lammie go and made the unilateral decision to acquire more elephants instead.

EMS Director, Michele Pickover said, “We are gobsmacked that the City of Johannesburg continues to be so callous and uncaring on this matter. The Democratic Alliance is swimming not only against global and local public opinion but alarmingly it is ignoring all the science and everything that we know about who elephants are and their highly complex social structure, which mimics our own. Not only is this a major PR disaster for the DA, but they are also squandering ratepayers’ money on buying in these two elephants from Inkwenkwezi and keeping elephants at the zoo. South Africa needs desperately to build a more caring and respectful society, but instead it seems the politicians are hell-bent on doing the opposite.”

In January this year, when the Johannesburg Zoo announced its search for a second elephant, experts warned that bringing another elephant into captivity will simply perpetuate the cycle of exploitation, and that there will be no guarantee that the elephants will get along. The warning fell on deaf ears. In another announcement, the Johannesburg Zoo committed to the enrichment and expansion of Lammie’s enclosure. Previous observations, conducted by an independent elephant researcher had revealed that Lammie experiences minimal environmental enrichment, has little shade and insufficient water in which to bathe. To this day, no renovations have been implemented and Ramadiba and Mopane were added to the same small and inadequate enclosure that Lammie has endured for 39 years. Furthermore, the new elephants, though of captive origin, were in a free contact system and were able to roam the confines of their previous home. Now, they will be imprisoned in a half hectare enclosure and have to face new challenges such as the moat.

“This is a sad day for elephants, yet another two elephants are unnecessarily been subjected to a life of imprisonment due to the lack of ethical management choices made by Joburg Zoo.” said Brett Mitchell, Director of Elephant Reintegration Trust.

Humane Society International/Africa is urging South Africans to show their disapproval by refusing to visit Johannesburg Zoo and to support elephant conservation projects that only portray elephants in the wild by protecting their habitats and protecting them from the threats of poaching and exploitation.