WASHINGTON—Animal protection groups from around the world have joined forces to urge governments across Asia to act urgently to permanently shut down unsanitary and brutal dog and cat meat markets and trades, amid growing global concern about zoonotic diseases and public health danger zones. Member organisations from the Asia for Animals coalition, including Humane Society International, FOUR PAWS International and Change for Animals Foundation, say the dog and cat meat trades pose a serious danger from the deadly rabies virus and other notifiable diseases, such as cholera, with dogs and cats often traded and slaughtered in the very same wildlife markets as wild animals who are the focus of COVID-19 concern.

Download video & photos (taken April, May 2020) of dogs on sale at markets in China, Vietnam and Indonesia.

An estimated 30 million dogs and 10 million cats are killed every year for the meat trade, mainly in China, Vietnam, Indonesia, Cambodia, India, and Laos. Most of this trade is in dogs and cats stolen from homes and back yards, as well as owned and roaming dogs snatched from the streets, with well-established links to the spread of rabies, cholera and trichinosis.

Kelly O’Meara, vice president of companion animals at Humane Society International, said: “Across the globe, nations are united in a collective response to the deadly COVID-19 pandemic, including calls to close wildlife markets that can act as a petri dish for zoonotic diseases. Within that context, it is only responsible for governments across Asia to also tackle the dog and cat meat trades that, while not connected to COVID-19, undoubtedly pose their own significant human health risks, such as the spread of trichinosis, cholera and rabies that kill tens of thousands of people every year. With hundreds of dogs at a time crammed onto trucks and driven across provincial and even international borders to filthy slaughterhouses and markets where these highly stressed animals are then displayed and slaughtered alongside myriad wild and domestic species, it’s easy to see how this trade is not only utterly brutal, but also the perfect breeding ground for the next serious public health disaster. New pathogens could jump to humans in a number of ways – a dog trader wounded during the day’s slaughter, a local consumer eating cross-contaminated dog meat bought at a nearly stall, or a tourist breathing in microscopic blood droplets as they sight-see in the market. This is no time for complacency or turning a blind eye; the dog and cat meat trades need to be shut down with urgency.”

The rabies virus has been found in brain specimens of dogs traded for human consumption in China, Vietnam and Indonesia. Not only is there a risk in handling the dogs, and in the extremely unsanitary slaughter and butchery process, but there is also some reason for concern surrounding consumption itself, likely through contamination due to unhygienic conditions. The cholera bacterium has also been found in samples of dog meat, equipment and waste-water released from slaughterhouses in Hanoi, Vietnam. There have also been historical reports in Vietnam and the Philippines of patients with signs of rabies infection who had been involved in preparing and eating dogs and cats who may have been infected.

In a statement to the Dog Meat Free Indonesia coalition, the United States’ Centers for Disease Control and Prevention confirmed, “There are reports that dog-meat markets have a higher rate of rabies than the general dog population, as people often sell dogs to the markets when they act sick; some of these sick dogs have rabies.… Furthermore, there are at least three published reports of humans acquiring rabies from activities associated with the dog meat market, emphasizing that the risk is very real.”

In many countries, the trade in dogs and cats for meat is largely fueled by criminal activity. Lola Webber, from the Change for Animals Foundation, says: “The dog and cat meat trades in Indonesia rely on criminal activity and there is increasing frustration among pet owners at the lack of action by law enforcement to deter or punish armed thieves who terrorise neighbourhoods and steal people’s dogs and cats. Once stolen, the animals are sold to slaughterhouses, markets and restaurants, kept in squalid conditions often alongside many other species of animals from various sources. The slaughter of dogs and cats is brutal, they are bludgeoned in the streets and then blowtorched, often whilst still alive. The streets are covered in pools of blood and the remains of other slaughtered animals. The cruelty alone is horrifying, but the risk of disease transmission is huge for anyone trading, slaughtering, butchering or even visiting these live animal markets. The Indonesian Government pledged it would ban the trade in August 2018, but we’ve seen very little commitment for action from provincial or central government. If COVID-19 isn’t a wake-up call, I don’t know what will be. If you told me tomorrow that there was a disease outbreak originating in one of the markets in North Sulawesi, I wouldn’t be the least bit surprised, and with the number of tourists visiting these places, the result could be terrifying.”

In Indonesia, Vietnam, Cambodia, China and parts of India, it is not unusual to see dogs and cats sold and slaughtered alongside other species including wildlife such as bats, snakes and rats, as well as other animals such as chickens and ducks. With growing global concern regarding the emergence of novel and deadly viruses from markets where multiple species are sold, the campaign groups are urging governments to take action. These markets provide an ideal environment for viral recombination and transmission between species, with potentially deadly results.

Cambodia’s government is being urged to publicly dispel myths that dog meat has medicinal benefits, including the belief it can ward off viruses including the one that causes COVID-19. Veterinarian Katherine Polak with FOUR PAWS in Southeast Asia, says: “The proliferation of completely unfounded, unscientific misinformation about dog meat is really worrying, with physicians even recommending dog meat to patients to treat various ailments. While we completely appreciate that cultures and habits are not easily changed, the government has a responsibility to safeguard the health of the nation as well as comply with global animal welfare standards. In Cambodia, dogs are being bludgeoned and drowned in fetid drowning pits, with total disregard for rabies which is endemic across Asia, while the government continues to do very little to protect people or animals.”

Download video & photos (taken April, May 2020) of dogs on sale at markets in China, Vietnam and Indonesia.

Help fight the dogmeat trade and other forms of animal cruelty 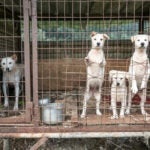 SEOUL—Seoul’s last three dog meat shops have agreed to end dog slaughter on-site, following over a year of campaigning from...