Home About Us News & Media Whales in the Courtroom 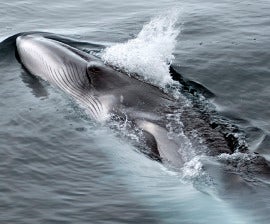 June 26, 2013 saw the opening of a landmark case about whaling at the International Court of Justice [1] in The Hague in the Netherlands. The case will ultimately be decided upon by the ICJ’s presiding judges and there is no appeal mechanism.

In 1982, the International Whaling Commission agreed to a moratorium on commercial whaling, which came into force in 1986.

Some countries, as is their legal right, took formal objections to this decision and so were not bound by it. Japan did not stop whaling and since 1987, it has characterized its whaling as “scientific research.”

Tell government leaders to ban commercial hunting and the transit of whale products.

Article VIII of the International Convention for the Regulation of Whaling allows countries to self-allocate quotas by issuing “special permits” to their own nationals for research. When the convention was agreed upon in 1946, many modern non-lethal techniques for study were not available and many believe that Japan has used this clause to circumvent the commercial whaling ban, in breach thereby of its obligations under the convention.

Japan’s “scientific whaling” has led to the deaths of more than 10,000 whales in the Southern Ocean Sanctuary, which the IWC established and intended to be a no-whaling zone.

New Zealand—allowed to join the case to make a short intervention—essentially supported Australia in its interpretation of the relevant treaty law.

Key issues in the debate included the refusal in 2005 of a large number of the scientists on the IWC’s Scientific Committee to review the Japanese proposal for the current phase of its Southern Ocean “research” and also why Japan had not developed non-lethal approaches in its investigations.

This case is precedent-setting for several reasons:

HSI is strongly supportive of the arguments being made by Australia and in fact first put forward the idea for this case more than a decade ago. We are grateful to Australia for taking this matter forward and hope that this will lead to the permanent end of commercial whaling in the Southern Ocean.

We will report the conclusions of the case as soon as we hear them. Take action and donate to help whales and other wildlife.

1. The ICJ is the main legal body of the United Nations and, more typically, considers matters related to boundary disputes between nations.