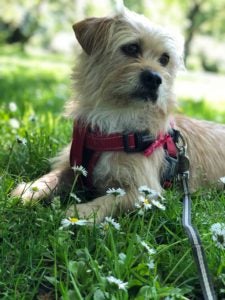 LONDON — As the Yulin dog meat festival in China’s Guangxi Autonomous Region fast approaches later this month, UK charity Humane Society International/UK shares happy ending stories of some of the dogs its Chinese activist partners have previously rescued from Yulin slaughterhouses. Snorki, Rosie, Fred and two dogs called Lily are just five of hundreds of dogs and cats HSI and its Chinese partners have saved from slaughter at Yulin, as well as from slaughter trucks and kill floors from across China.

Although the summer solstice event on June 21st in Yulin has come to symbolise China’s dog and cat meat trade, many people are unaware that the brutality of this crime-fuelled trade takes place all year round and country-wide, with an estimated 10-20 million dogs and 4 million cats killed each year. Many of these animals are believed to be strays snatched from the streets and pets stolen from people’s backyards. They are crammed into wire cages and driven for hours or even days across the country, before reaching the slaughterhouse where they are beaten to death, some still wearing their pet collars.

Last year, Chinese activists supported by HSI rescued 135 dogs from Yulin slaughterhouses, five of whom — Lily, Harley, Fred, Coco and Rosie — the charity flew to the United Kingdom where they found forever families. In 2016, HSI rescued 170 sick and injured dogs from slaughterhouses and markets in Yulin, with four lucky dogs – Lily, Snowy, Snorki and Lucy – and two cats – Simon and Li – now living safe and happy in the U.K. The group of 170 had been just one day away from being slaughtered for the festival.

Some of HSI’s dog meat trade survivors have gone on to make celebrity friends. Li the cat who lives with his human Daniel in Crouch End, was lucky enough to meet Harry Potter actress Evanna Lynch when HSI filmed them for a video about the suffering of cats for the meat trade. Lily, Snowy, Snorki and Lucy were all welcomed to the UK by actor and animal campaigner Peter Egan who gave them their first cuddle on British soil with the HSI charity.

Claire Bass, HSI’s U.K. director, said: “These dogs and cats have been to hell and back, surviving China’s terrifying meat trade, and it’s so humbling to say that despite their ordeal, their resilience and forgiving nature shine through. They are just a few of the millions of dogs and cats who are stolen and snatched for China’s meat trade all year round. Yulin is one relatively small example of a much larger, uglier issue that thousands of dedicated Chinese activists are working to stop. Contrary to the assumptions by many in the West, most people in China don’t eat dogs and in fact they are horrified at the thought of a trade that takes their canine companions away from them.”

Rosie was saved from Yulin slaughter in 2018 and now lives with Kirsten McLintock in Norfolk. Kirsten says: “It’s been six months since I first got Rosie and she has been an utter delight; friendly with other dogs, no separation anxiety, perfect traveller in the car. It’s clear that she must have been someone’s stolen pet, as from her first arrival she was house trained and used to having a collar and walking on the lead. Chasing squirrels is her favourite thing in the whole world, and she’s a tart for a tummy rub. Her latest discovery is the beach.  She does a little happy dance and bottom wiggle when we reach the beach which is so sweet. I love her to bits, she’s the sweetest dog who is so intuitive, soft and gentle.”

Black and white dog Lily was saved from a Yulin slaughterhouse in 2018 by HSI’s partner activists. The rescue produced an iconic photo of Lily sitting patiently on the kill floor staring pleadingly at her rescuers. She now lives with spaniel Sophie and adopter Susie Warner in Berkshire. Susie says: “Lily is a superstar diva and she is adorable. A huge thanks to Humane Society International for saving her and allowing her to live her best life.”

Little Fred was saved in 2018 and now lives in London with Fernanda Gilligan, her husband and three year old daughter. Fernanda says: “We are so grateful to be Fred’s new family. He is such a fantastic addition. He loves going for walks and runs in the parks. Adventures to the countryside are even more enjoyable with Fred and we just love having him with us as much as possible. He truly is a remarkable addition to our family.”

Lily was rescued in 2016 and adopted by Lynn Hutchings in Kent, who says: “Lily has blossomed from a shut-down girl who didn’t trust humans very much to a family dog who loves everyone especially if she can charm them into giving her food!”

Snorki from HSI’s 2016 rescue found her happy home in Clapham, South London with Angelina Lim. Angelina says: “Snorki is far more settled than she was at first but she’s still fearful of strangers. Once she knows you, she’ll happily accept strokes and belly rubs, but you have to earn her trust. I’m convinced she was a stolen pet because she was housetrained within one day. She also had a small hump on her back which has since disappeared, I think from being squashed in a cage for quite a while before she was rescued. My life is so enriched with Snorki around, she is a joy to live with despite being a 24/7 eating machine!”

HSI UK would like to thank All Dogs Matter and the Wild at Heart Foundation for helping the charity finds homes for the Yulin rescues.

Photos of our Yulin rescue dogs are available on request.