Home About Us News & Media Global wildlife conference votes to

This release has been corrected.

GENEVA—The first vote at the 18th meeting of the CITES Conference of the Parties has delivered a historic win for African elephants to end the cruel practice of removing live elephants from the wild for export to captive facilities. CITES is the UN Convention on International Trade in Endangered Species.

Iris Ho, senior wildlife specialist for wildlife programs and policy for Humane Society International, said: “This decision will save countless elephants from being ripped away from their families in the wild and forced to spend their lifetimes imprisoned in substandard conditions at zoos. HSI applauds this decision and calls on all Parties to affirm this decision at the plenary session next week.”

Forty-six countries voted in favour, 18 voted against and 19 countries abstained. This achieved the 2/3 majority for the proposal to pass in committee.

Audrey Delsink, director of wildlife for Humane Society International/Africa and an elephant biologist, said, “The export of live wild elephants serves no credible conservation purpose and is opposed by numerous elephant biologists. Elephants are highly intelligent, social animals with strong family bonds. The capture of baby elephants is horribly cruel and traumatic to both the mothers, their calves and their herds that are left behind. Calves suffer psychological and physical harm when taken from their mothers. Zoos and other captive facilities force these calves to live in an unnatural, unhealthy environment that does not meet their complex needs.”

The decision applies to the elephants in Botswana and Zimbabwe* with elephant populations on Appendix II of CITES, which has an annotation that permits this trade to “appropriate and acceptable destinations.”

Zimbabwe has captured and exported more than 100 baby elephants to Chinese zoos since 2012. These calves, severely traumatized by being torn from their mothers, were subsequently abused through violent handling that included being kicked and beaten, and several have consequently died.

Give now to help protect elephants and other animals 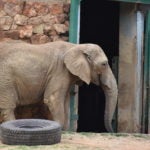 Johannesburg – Humane Society International/Africa has reacted angrily to the news that Johannesburg zoo has purchased two new elephants to...

By participating in certain activities while traveling, you may be feeding the demand for captive wildlife and wildlife for entertainment....