WASHINGTON—Korean-American actor Daniel Henney just became the proud pup parent of Juliette, a young golden retriever rescued from a dog meat farm in Hongseong, South Korea by Humane Society International. The international film and television actor is best known in the U.S. for his role in the series Criminal Minds and is a passionate dog advocate. He has worked with HSI for several years to raise awareness in South Korea on the benefits of dog adoption, which is relatively uncommon there. Henney also has a nine-year-old golden retriever rescue named Roscoe.

Henney said, “When I first met Juliette, it was love at first sight. She completely and totally melted my heart and she has become such an amazing member of our family. Considering what she’s had to live through, she’s so gentle and sweet, so patient. But there are thousands of other dogs just like Juliette living in cages on dog meat farms who need our help and that’s why I’m supporting HSI’s mission to end the suffering.

I consider myself very lucky to have gotten Juliette; she is an angel; an absolutely wonderful dog and she’s fit into the family like a Lego. Not only has it helped her but it’s helped us so much. Roscoe is so full of life now because he has this new sister and they are absolutely inseparable! They go everywhere together – they play together, they eat together, they sleep on top of each other. It’s been a wonderful experience.”

Henney, a passionate dog lover, is teaming up with HSI to increase awareness and acceptance in South Korea of dog adoption. Although dog ownership has increased rapidly in South Korea in recent years, with one in five households in Seoul now owning a pet, many people buy pet store puppies who are sourced from puppy mills where dogs are intensively bred in deprived conditions, and even from dog meat farms that breed pups for both food and family.

“We couldn’t have wished for a happier ending for Juliette, who is such a sweet-natured and loving dog,” said Jeffrey Flocken, HSI president. Flocken is also a proud adopter of a dog HSI rescued from a dog meat farm in South Korea.

“She’s had a rough start in life; a dog meat farm is a grim place to live with absolutely no love or comfort, so we were thrilled to be able to save Juliette and all the other dogs there from such a fate,” said Flocken. ”So many dogs in South Korea need to find homes, so we’re excited to be working with Daniel to increase awareness of dog adoption. Juliette is a perfect ‘ambassadog’ for our work, and her story will hopefully help other dogs find their happily ever after.”

Henney continued, “Juliette deserves so much love. I want to give her the chance to be a dog, to run and enjoy life. Once she’s fully settled, I want her to be an example for how great these dogs are, and I want her to help encourage people to adopt these wonderful dogs from these dog meat farms.”

Humane Society International has rescued more than 2,000 dogs from dog meat farms in South Korea, working in cooperation with farmers who wish to exit the industry in search of new beginnings. The farmer in Juliette’s case intends to switch to growing vegetables for a more profitable and humane future.

Nara Kim, HSI/Korea’s dog meat campaigner, said, “Daniel’s passion and personal experience will help us make a significant impact to increase interest and acceptance of dog adoptions in South Korea. Our goal for the future is to see more of the dogs HSI rescues from dog meat farms find forever families within South Korea. We usually fly the dogs to the United States, Canada and the United Kingdom to seek adoptive homes, but we hope to help more South Koreans open their hearts and homes to these wonderful dogs in time.”

A Michigan native, Henney became a household name in Korea after starring in the television drama My Lovely Sam-soon and starring in such series as Hello Franceska, Spring Waltz and The Fugitive: Plan B. In the U.S. his television credits include Three Rivers, Criminal Minds: Beyond Borders, Hawaii Five-0, NCIS: Los Angeles and Revolution. He voiced the role of Tadashi Hamada in the Academy Award-winning film Big Hero 6 and appeared in the films X-Men Origins: Wolverine, The Last Stand, Seducing Mr. Perfect, My Father, The Spy: Undercover Operation and Shanghai Calling.

He will next star in the Amazon epic fantasy drama Wheel of Time. He spends his time between his homes in California and Michigan with Roscoe and Juliette. 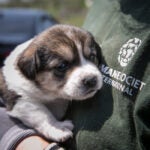 South Korea is the only known country in the world where dogs are routinely and intensively farmed for human consumption....