Home About Us News & Media Illegal dog slaughterhouse in Dalia 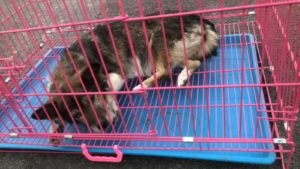 DALIAN, China – Law enforcement in Dalian, China and local animal protection group VShine have shut down an illegal dog slaughterhouse in the city after a tip-off from an outraged citizen. Dalian law enforcement and Vshine have worked together for years to promote animal welfare, and the city operates a zero-tolerance policy to the dog meat trade. The slaughterhouse had only recently been opened by a man who lives outside the city.

Seven dogs were found alive at the property in suburban Dalian when police and activists moved in, mostly German shepherds, golden retrievers and a Rottweiler. The slaughterhouse operator surrendered the dogs to Vshine so that they could receive veterinary attention at their shelter, a partner project supported by animal charity Humane Society International. One of the dogs was wearing a pet collar, but it is suspected that the others could have been former guard or farm dogs who were either stolen or purchased from their owners.

Dezhi Yu of Vshine, said: “We are very proud that in Dalian you will rarely find a restaurant serving dog meat, and generally citizens here care very much about their dogs and cats. So when we received a call about this new slaughterhouse, we and the law enforcement officers acted immediately to shut it down. Whenever anyone dares to open such a cruel business here, they are very quickly reported and the police take immediate action. If all police across China were as active as Dalian police, we could crack down on the cruel dog and cat meat trade almost overnight.”

The rescued dogs are now recovering at Vshine’s animal shelter in northeast China where HSI funding will help support their veterinary care and rehabilitation.

Dr Peter Li, Humane Society International’s China policy expert, says: “Most people in China don’t eat dogs, but the city of Dalian is particularly progressive on animal welfare, and a shining example of what the whole of China could achieve if animal protection were taken more seriously. The dog meat trade is not welcome in Dalian, with the local police and animal activists using China’s food safety laws to eliminate this cruelty in the absence of any animal protection legislation. If all Chinese police acted the same, we could have a massive impact on the dog and cat meat trade. If China went further and introduced a robust animal cruelty law, we could eradicate the trade very quickly.”

Download photos of the dogs rescued from the Dalian slaughterhouse: https://newsroom.humanesociety.org/fetcher/index.php?searchMerlin=1&searchBrightcove=1&submitted=1&mw=d&q=DalianRescue0619