SAN JOSÉ—The Sanctioning Administrative Proceeding Court of the National Animal Health Department (SENASA) of the Ministry of Agriculture and Livestock announced a sentence in favor of animal welfare in Costa Rica, convicting a person who was breeding dogs in a puppy mill. Humane Society International/Latin America worked with SENASA to rescue the dogs in this case.

In November 2017, more than 35 dogs were rescued from a puppy mill named Flora and Fauna in Limón. The dogs included breeds such as French poodle, Maltese, Shih Tzu, Chihuahua, Yorkshire terrier and Pekinese. At the time, they were living in unsanitary conditions and many suffered from health issues such as severe skin problems, alopecia, eye diseases, malformations, periodontal disease and tooth loss.

Amanda Chaves, manager of HSI/Latin America’s companion animal program, said: “No animal should be forced to live in such deplorable conditions as we found these dogs in 2017. We are grateful to SENASA for allowing us to help with the animals’ rescue. We are relieved that the dogs were adopted and now live in homes full of love. We will continue supporting and collaborating with SENASA and other local organizations to improve welfare levels of animals in Costa Rica.”

The majority of the puppy mill’s females were forced to give birth continuously as a means of income for the mill’s operators. After the rescue, the animals were checked by a veterinarian, who found that several of them were pregnant, including some whose lives were at risk due to their advanced age.

Thanks to evidence collected by SENASA, the Sanctioning Administrative Procedure Tribunal was able to demonstrate that the accused illegally bred dogs for sale. The offender was found guilty of the facts and fined approximately ₡645,000 colones, equivalent approximately to the base annual salary of a professional with a university degree.

HSI/Latin America encourages people to adopt companion animals (dogs and cats), instead of buying them at pet stores or from illegal breeding sites. Puppy mills breed animals for trade, focusing solely on economic profit and not on the welfare of the animals. The dogs bred in these places usually live in small wire cages with little to no human interaction, veterinary care or exercise. 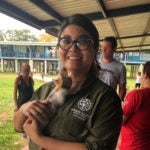 SAN JOSÉ—During February and March, Humane Society International/Latin America, together with the National Animal Health Service, the College of Veterinary...

SAN JOSÉ, Costa Rica—Today concludes a week of training for more than 60 officials of the Judicial Investigation Agency (Organismo...