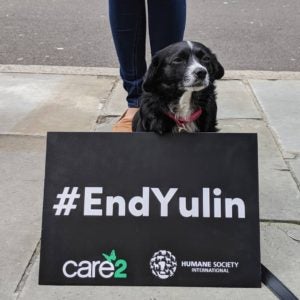 LONDON – Dame Judi Dench and violinist Vanessa-Mae have sent heart-felt messages of support and solidarity for a 1.5 million-signature petition by Care2 and Humane Society International, delivered today to the Chinese Embassy by dogs rescued from China’s annual Yulin dog meat festival. The festival, which starts on 21st June, sees thousands of dogs and cats beaten to death and eaten, most of them stolen pets grabbed from back yards and the streets. Most people in China don’t eat dogs, and pet owners and dog thieves have had numerous violent clashes.

Snorki, Fred and two dogs named Lily were saved from Yulin slaughterhouses in 2016 and 2018 by Chinese partner groups supported by animal charity Humane Society International. HSI and the ‘ambassadogs’ were joined by petition partners Care2 as well as Clacton MP Giles Watling who shares the campaigners’ desire to see urgent action to end the gruesome spectacle of Yulin.

Claire Bass, Executive Director of Humane Society International/UK, said: “The dog meat trade in China is first and foremost about crime and cruelty. The Yulin festival is one small but distressing example of an unspeakably cruel trade run by dog thieves and sellers who routinely steal pets in broad daylight using poison darts and rope nooses, defy public health and safety laws, and cause horrendous suffering, all for a meat that most people in China don’t consume. Dogs like Snorki, Fred and Lily are amazing ambassadors for our campaign to end this horror, we are proud to deliver this petition with them. And we’re immensely proud to support dedicated animal advocates in China who passionately work to end the dog meat trade, saving so many lives along the way.”

Beth Granter from Care2, the online community, says: “The huge number of signatures on this petition shows the strength of feeling against Yulin dog meat festival. Care2 members want to see an end to the dog meat trade entirely. When people’s pets are being stolen, cruelly killed and then eaten, this is inhumane, and has to stop. We hope that the Chinese authorities will hear the voices of over 1.5M people who want to see an end to this cruelty.”

Actress Dame Judi Dench sent a message of support for the petition delivery, saying: “It fills me with sadness to think that the Yulin dog meat festival is just around the corner again. So I wanted to send this message as a symbol of my solidarity with all the thousands of people in China against the dog meat trade, who love their dogs and cats just as much as we do, but who go through the awful heart ache of having them stolen by dog thieves. I cannot imagine the suffering of those poor dogs, and I hope very much that one day soon this cruel trade will end.”

Violinist Vanessa-Mae showed her support with a video message, saying: “Please join us in solidarity as we want to see an end to China’s barbaric dog meat trade including the horrific Yulin dog meat festival… Along with compassionate people in China, who do care about dog welfare, please show that you also have a heart, and support us in calling on China to end such cruel and heart breaking treatment of dogs.”

The Yulin dog meat festival is not a traditional festival. It was only invented in 2010 by dog traders trying to boost flagging meat sales. Before the festival started, Yulin had no history of mass dog slaughter and consumption. The World Health Organisation has warned that the dog meat trade spreads lethal diseases such as rabies and cholera.

The Yulin dog meat festival begins in earnest on 21st June to mark the summer solstice. When first launched, as many as 15,000 dogs were killed during the core festival days, but Chinese and international pressure has seen this figure decline to around 3,000 dogs. However, many hundreds are still killed each day in the weeks leading up to the festival, and an estimated 10 million dogs and 4 million cats are killed for meat throughout the year across China.

Giles Watling, MP said “I am proud to stand with so many others in calling on the Chinese government to end the cruel Yulin dog meat festival. An action that would save thousands of dogs from terrible suffering each year, and also help prevent pet theft and the spread of rabies within China. I implore the Chinese authorities to heed the calls from compassionate citizens both inside China and across the world who want to see the abhorrent dog meat trade ended once and for all.”