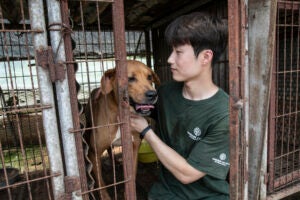 WASHINGTON—This week, 34 dogs are arriving at Washington Dulles International Airport from South Korea where they were rescued from the dog meat industry by Humane Society International/Korea and its partners. Romeo, Nuri, Daisy, Phoenix, Brown Bear and the other dogs coming to the U.S. will be cared for at a care and rehabilitation center operated by HSI and the Humane Society of the United States. They will receive the love and comfort that the dog meat industry denied them, including beds, a nutritious diet, enrichment and veterinary care. Eventually they will be transferred to the HSUS’s shelter and rescue partners where they will be ready for adoption into loving homes.

Up to an estimated 1 million dogs a year are killed for meat in South Korea, intensively bred on farms where they are locked in barren, metal cages without water or proper food, living in squalid conditions, many suffering from malnutrition and painful skin and eye diseases. Most are brutally slaughtered at around one year of age, usually by electrocution.

Sangkyung Lee, dog meat campaigner for Humane Society International/Korea, said: “For these dogs flying to the United States, South Korea’s dog meat industry will soon be a distant memory. But hundreds of thousands of other dogs are still languishing in terrible conditions on dog meat farms for a meat that very few Koreans want to eat and most want banned. It’s now been one year since the South Korean government acknowledged the need for a dog meat task force, and we are still no closer to ending this cruel industry. The time for delay is over. We are urging relevant government ministries to proactively work towards ensuring the task force delivers a plan to end the suffering of all dogs living miserable lives on dog meat farms.”

Jeffrey Flocken, president of Humane Society International, said: “As a proud parent of a dog rescued in 2019 from the 15th farm Humane Society International helped transition out of dog meat industry, I know these dogs can become wonderful additions to a family. All these nearly three dozen dogs needed was the chance to be saved from the dog meat industry, and that was made possible by HSI’s fantastic teams and partners on-the-ground in South Korea and here in the United States.”

effectiveness of our staff and animal advocate partners in South Korea that local authorities there are working more frequently with us to help coordinate care for dogs saved from the meat trade. As these rescued dogs arrive in the United States and move into our rehabilitation center, we look forward to the next chapter: preparing them to be adopted into loving homes where they can finally enjoy life as all dogs should.”

As these dogs start new lives, Humane Society International will continue to campaign for an end to the dog meat industry. Since 2015, HSI/Korea’s Models for Change program has helped dog farmers in South Korea transition to new, more humane and profitable livelihoods such as chili plant and parsley growing or water truck delivery. HSI/Korea has permanently closed 17 dog meat farms and rescued more than 2,500 dogs who find adoptive homes in the United States, Canada and the United Kingdom, with a small number rehomed in South Korea.

An opinion survey by Nielsen Korea published and commissioned by HSI/Korea in October this year, shows that 85% of Koreans say they have never eaten dog meat or will not do so in the future. In addition, 56% of people said they support a dog meat ban.