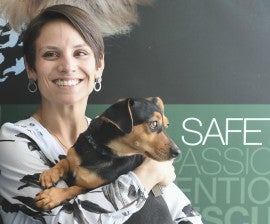 MONTREAL—Olympic gold medalist Meagan Duhamel, joined by representatives from Humane Society International, greeted dozens of dogs rescued this week from a dog meat farm in Siheung-si, South Korea, at an HSI temporary shelter in Montreal, where they are currently receiving urgently needed care.

Rebecca Aldworth, executive director for HSI/Canada, said: “I am so pleased that HSI was able to rescue these desperate dogs from the horrific dog meat trade. At the farm, multiple dogs were crammed together in small wire cages, while others were chained to stakes in the ground. They had little protection from the freezing temperatures, and they had never received proper food or water or veterinary care. Many of the dogs were emaciated and had open sores and skin infections. But because of our amazing supporters, these dogs now have a second chance and a new life in Canada.”

Give now to support our life-saving work.

Olympic medalist Meagan Duhamel, whose dog Moo-tae was rescued from a South Korean dog meat farm, said: “Millions of dogs are subjected to unspeakable deprivation and cruelty on intensive farms and brutally slaughtered every year for the South Korean dog meat trade. I am happy to join with Humane Society International and so many courageous South Korean advocates who are working to expose the plight of these dogs and bring an end to the gruesome trade.”

HSI senior policy manager in South Korea, Borami Seo stated, “Make no mistake, South Korean advocates are leading the campaign to end the dog meat trade in my country. The growing pet culture in South Korea, and the clear interest of many farmers to transition out of this industry, is a strong indication that the dog meat trade’s days are numbered. It is time my government acted to phase out this cruel industry for good by transitioning farmers to more humane industries.”

To date, HSI has closed 11 dog meat farms and rescued about 1300 dogs from horrible fate in the dog meat trade.

This rescue is an enormous undertaking and would not have been possible without the incredibly generous support of the Eric S. Margolis Family Foundation. We also thank Friends of HSI, Sharp Transportation, supporter Barbara Elliott and C.E.S. Inc., our incredible shelter staff and volunteers, and Mondou for supplying specialized dog food.