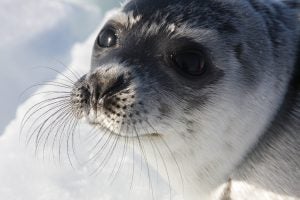 BRUSSELS—Humane Society International celebrated the 10-year anniversary of the historic European Union ban on trade in commercial seal products. The EU ban, a watershed event in the global campaign to stop commercial sealing, was adopted by an overwhelming majority in the European Parliament on 5th May 2009.

The impact of the EU ban — and of the many other seal product trade prohibitions that followed — is undeniable. Prices paid for seal fur in Atlantic Canada have declined by more than 70%, while 90% of licensed commercial sealers no longer participate in the slaughter because it is not profitable for them to do so. As a result, more than 3 million seals have been spared a horrible fate in the past decade alone. International prohibitions on the seal product trade contain clear exemptions for products of indigenous seal hunts.

Rebecca Aldworth, executive director for HSI/Canada, said: “Ten years ago, I watched firsthand as the European Parliament voted to prohibit commercial trade in seal products. In the minutes before the vote, images of so many suffering and dying baby seals kept flashing through my mind. When the vote was in, I knew that the beginning of the end of this brutal industry had just happened. As someone who has observed commercial sealing for 18 years, I will be forever grateful to the EU for its moral leadership and for saving so many seals from a horrible fate.”

Dr Joanna Swabe, senior director of public affairs for HSI/Europe, added: “The adoption of the EU Regulation on trade in seal products was certainly an amazing landmark victory for animal protection, but this was not the end of the story. In the years that followed, the legislation was subjected to and, most importantly, withstood separate spurious legal challenges in the European Courts and at the World Trade Organization. Most importantly, the WTO Appellate Body ruled that, while the legislation needed tweaking, the EU was justified in banning the cruel products of commercial seal hunts on the grounds of public morality. By 2015, I found myself back in the European Parliament talking about seals again as a legislative proposal to amend the ban to make it fully compliant with WTO rules was considered by MEPs. Yet again, the seal product trade ban survived cynical attempts from opponents to water it down and thankfully the EU’s borders remain firmly shut to commercial seal products.”

Give now to protect animals from all forms of cruelty

Victory! India bans the import of seal fur and skins

It’s time to end the slaughter. HSI New Delhi—In a landmark decision that will spare the lives of thousands of...

Baby gray seal. Kathy Milani Just a month ahead of the 2017 Canadian seal hunt, Switzerland has concluded a multi-year...

Rebecca Aldworth/HSI The European Court of Justice has rejected an appeal brought by commercial sealing interests and some Inuit representatives...

A significant victory for seals. Marcus Gyger The World Trade Organization today issued a final decision in its ruling to...

About the Canadian Seal Hunt: Q&A

Canada’s annual commercial seal hunt is the largest slaughter of marine mammals on the planet. Facing harsh criticism the world...

Before the killing begins. HSI The largest slaughter of marine mammals on Earth. HSI Seal pups are clubbed or shot...