Home About Us News & Media Shocking film of injured, diseased

The footage exposes the suffering of animals for fur fashion, even in a country like Finland where the fur trade boasts that almost 100% of fox fur farms are certified by the fur trade’s SAGA Furs assurance scheme. The scheme promises “the highest level of animal welfare”, but the atrocious conditions documented show a different story. Fox fur originating from Finland is used by brands including Fendi, Yves Salomon, Woolrich, Herno, Ermanno Scervino and Max Mara, and is seen in stores including Harrods and Harvey Nichols.

The exposé comes as more than 1.2 million EU citizens so far have signed the EU-wide “Fur-Free Europe” European Citizens’ Initiative petition calling on the European Commission to ban the farming and sale of fur in the EU. The shocking footage also shines a spotlight on the UK’s fur trading double standard because since banning fur farming in 2000, the UK has imported more than £16million of fur from Finland.

Through its #FurFreeBritain campaign, HSI/UK is urging the government to end this by banning UK fur imports, a move supported by 77% of the British public. A petition calling for a ban on the sale and import of fur in Britain currently stands at over 1.1million signatures.

Claire Bass, senior director of public affairs at Humane Society International/UK, said: “The suffering that millions of animals endure on fur farms, spending their entire lives in tiny barren cages, is heart breaking. Pus oozing sores, mental breakdown, and cannibalism are the reality of fur farming, and a million miles away from the glossy PR the fur trade tries to sell with its assurance schemes. The UK must stop providing a market for the fur from appallingly treated animals like these, and high-end department stores like Harrods that still sell fur should recognise that there is no such thing as responsibly-sourced fur.

“In 2021, the UK government ran a consultation on the UK fur trade to which 30,000 people responded, but 18 months later it has still not released the results or set out a policy position. For as long as the UK is part of the global fur trade, we’re complicit in this cruelty. The enormous public support for bans on fur farming and sales in both the EU and UK give politicians an overwhelming mandate to consign this cruel trade to the history books once and for all.”

Finnish animal group Oikeutta eläimille filmed at six randomly selected fur farms in the Ostrobothnia region of western Finland between June and November 2022. OE’s Kristo Muurimo said: “The majority of Finns want to ban keeping animals in barren cages just for their fur, but our politicians have failed to bring an end to the cruelty. An EU-wide ban would help the animals also in other member countries where the greed for money is valued over animal welfare. The UK, which led the way with the first fur farming ban, should certainly not be providing a market for products shamefully derived from the diseased, injured and suffering animals who are languishing in Finland’s fur farms.”

Act now for a fur-free Europe 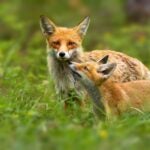 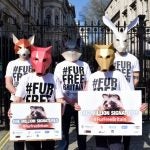 London—CEOs and Directors from five of the UK’s largest animal protection organisations gathered today with campaigners in geometric fox masks...

LONDON­—Frasers Group, owner of House of Fraser department stores, as well as luxury retail chain Flannels and retail brands including...