Home About Us News & Media How you can help save Ralph

What happens when an all-star director, puppeteer, cast and crew join forces with a global leader in the animal protection movement? Meet Ralph, a stop-motion animated rabbit who is the new spokesbunny for Humane Society International’s fight to end animal testing for cosmetics.

Written and directed by Spencer Susser, Save Ralph is a docu-style short that tells the story of a rabbit who works as a “tester.” Released this spring in 5 languages, the film features the voices of Ricky Gervais, Taika Waititi, Zac Efron, Olivia Munn, George Lopez, Rosario Dawson and more.

Painful experiments have left Ralph blind in one eye and suffering from skin irritation and a constant buzzing in one ear, but he reassures the viewer that he’s just doing his job to ensure humans have safe shampoo. In this edited interview with HSI, puppeteer Andy Gent talks about bringing Ralph to life and how he hopes the heartbreaking character helps end cosmetics testing on animals around the world.

Why do you think using stop-motion animation helps tell Ralph’s story?
There’s a nice thing about animation in that it opens your eyes to many things without showing all the reality, but it’s a good communicator. And I think Ralph epitomizes that. He is very empathic, very emotive, and he’s trying to be really strong in the face of doom in his world. So, bringing that to life in the character, we’ve got to make sure that he can change his expressions, that he has the physicality, the structure in his body to move in a way that can act out and tell the story. Often with animation, just the eyes can be used as an acting device. You don’t need to move the rest of the puppet. So we spend a lot of time making those right. The beauty of stop-motion animation—I think the beauty of animation, full stop—is that you can tell very complicated, very challenging stories and bring them to life in a nonthreatening way that helps to educate and inspire people.

How did you create such intricate sets and characters?
When you watch and re-watch the film, hopefully you’ll see the attention that’s been paid to all the details. We created the wallpaper, the electrical sockets and the kitchen utensils, and we used real carpets. It took about five weeks to cover Ralph in fur (fake fur, of course), three weeks to do his eyes, one week for his teeth and his tongue, three weeks for his mechanical body, another two weeks for his head, and then weeks of set building to make every tiny element down to the curtains, the toothbrushes, the cookie jar absolutely perfect for Ralph. It’s an endless amount of work, and we’ve done it because that’s how we get the audience to believe that what they’re looking at truly is Ralph’s world. It was a genuine labor of love for us all. We all fell in love with Ralph and wanted to help HSI tell his story so that we can end animal testing for cosmetics.

How did you approach conveying the grim reality of Ralph’s situation while still making a film that people will want to watch?
We applied a lot of love and attention in showing the physical suffering of being used as a tester¬—the skin rashes, the scars and swollen red eye. Ralph is such a sweet character, he tries to downplay the awfulness of what is happening to him, but his injuries tell the true story and in a way that draws the audience in rather than makes them look away. Your heart breaks for him because when he’s trying to convince the audience that everything’s OK, he’s really trying to convince himself. Of course, it’s not OK. But stop-motion animation allows us to tell this tragic, upsetting truth about something awful and unjust in a way that recruits people to win this fight with us.

What’s been the most rewarding aspect of working on this project?
We’ve worked on this for months and months and months. We know the ins and outs of every single part of it all, but when you play the roll back, everybody’s welling up in tears at the end. So I think you can see from that there’s a personal investment in it. It’s not just about telling a story in a film or in advertising. People working on this have connected to it, and when we see it played back, we’ve stopped thinking of Ralph as a stop-motion animation puppet and instead as a character telling a story that makes you want to change things.

How do you hope people react to the film?
I hope they all take Ralph into their hearts in the same way that we all have and get involved, because he really needs our help.

“I stopped eating animals about eight years ago, but I didn’t know how else I could help. When the opportunity to create a new campaign for HSI arrived, I thought it was the perfect way to give animals a voice. Save Ralph creates awareness that animals are still being tested on for cosmetics around the world. It’s a call to action to help end this horrendous practice for good. I hope it strikes a chord and moves people to do something about it.” — Spencer Susser, writer/director of Save Ralph

Donate to help animals suffering in labs and other cruel situations worldwide. 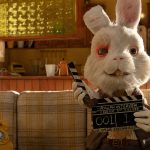 Meet Ralph Ralph-the-rabbit is a tester—one of untold thousands of rabbits and other animals used each year in government-required...

Sign up to receive news and action alerts about helping animals.