Home About Us News & Media HSI/Canada demands cancellation of

MONTREAL—In the wake of the lowest sea ice formation in recorded history off of Canada’s East Coast, Humane Society International/Canada is urging the Canadian government to stop the commercial seal hunt. Canadian government scientists anticipate mass mortality of newborn seal pups as their sea ice habitat melts before they are strong enough to survive in open water. Furthermore, allowing hundreds of sealers to operate in cramped conditions on sealing vessels during a global pandemic presents a clear threat to public health.

“Climate change is causing rapid deterioration of the sea ice cover off of Canada’s East Coast. For the ice breeding seals who are the targets of the commercial seal hunt, it is a disaster,” stated Rebecca Aldworth, executive director of Humane Society International/Canada and a first-hand observer of Canada’s commercial seal hunt for eighteen years. “No responsible government would allow the few pups who survive these unprecedented ice conditions to be slaughtered just to produce fashion items. Moreover, no responsible health authority would allow this senseless, shameful hunt to proceed during a global pandemic. We are calling on the Canadian government to do the right and responsible thing and stop the 2021 commercial seal slaughter in Atlantic Canada.”

Canadian government scientists clearly state that the sea ice in the Gulf of St. Lawrence and off of Newfoundland will continue to deteriorate, and that the resulting mass mortality of pups will have a severe impact on the harp seal population. A precautionary approach to wildlife management clearly precludes commercial hunting of an ice dependent species whose ice habitat is quickly vanishing.

Notably, climate change makes commercial seal killing methods even more inhumane. Veterinary studies have strongly emphasized the severe suffering that results from shooting seals in or near open water, given the high wounding rates documented in the Canadian seal hunt, and the ability of wounded seals to escape beneath the water’s surface (where they die slowly and are not retrieved). As ice conditions deteriorate, almost all commercial sealing will happen in these conditions. Moreover, when seals are shot in open water or on ice too fragile for a sealer to stand on, they are retrieved with gaffs (long wooden poles with metal hooks) without the sealers first being able to physically confirm death. This results in many seals being impaled, while conscious, on metal hooks and hoisted onto bloody boat decks before they are beaten to death. 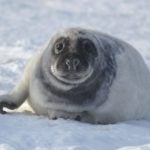 LONDON—Scotland has banned the shooting of seals by the fisheries industry in a move welcomed by Humane Society International/UK as...