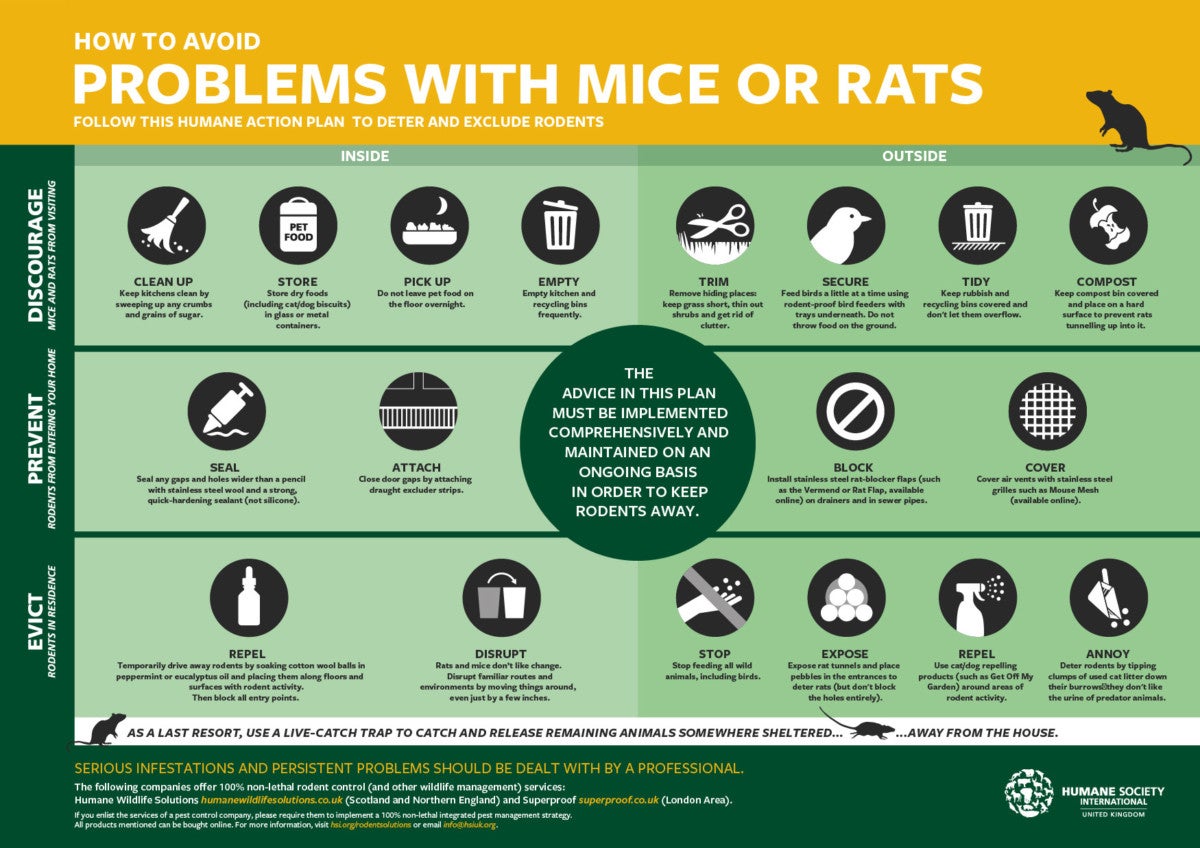 Rats and mice live alongside us, thrive because of us, and survive in spite of our attempts to eradicate them. While they mean us no harm, the presence of unwanted rodent visitors can, at times, undoubtedly cause problems for people, In order to ‘control’ them, a selection of products is available including repellent sprays, ultrasonic devices, poisons and several different types of traps, some lethal and some intended for live release.

HSI advocates that the default solution should be to implement humane methods of deterrence and eviction instead of killing them. This is for two important reasons:

Like all animals, rats and mice require food and shelter and will seek out easily accessible sources of both. Rats prefer to be outside but mice like to live indoors and can enter your home by squeezing through very small spaces, for example air vents, and gaps around gas and water pipes. Prevention is better than cure: seal off holes and don’t tempt mice and rats in with easily accessible food supplies. The food that we throw way in our rubbish or compost bin, leave out for our companion animals and put out for wild animals whose visits we do enjoy, such as hedgehogs and birds, provides rats and mice with a tempting buffet. Many rat ‘infestations’ are the result of bird-feeding.

As soon as a rat or mouse problem is identified, it is important to take swift action. Identify the source of food that attracted them and remove it. Humanely remove the animals and then seal up holes to keep others from gaining entry.

Unfortunately, unless mice leave of their own volition, even with the best of intentions it is very difficult to deal with them in a way that doesn’t involve some risk for them or their offspring. Catching animals and releasing them away from the home should only be a last resort if you have not been able to encourage them to leave of their own accord. Whilst it is undoubtedly preferable to a slow and certain death from poisoning, there is no guarantee that indoor mice will survive in unfamiliar territory outside if they have been inside for generations, and their chances will be reduced further by cold weather. They may also leave behind young, dependent animals in the nest, who will perish. If you do need to address the situation urgently, either purchase a humane trap (available in some DIY/garden centres and hardware stores) or follow these steps for making a home-made version. Whichever trap you use it must be checked first thing in the morning, last thing at night and at least once more during the day and the animal released as soon as possible.

After animals have been evicted or captured and released, it is vital that they are prevented from re-entering. Determining points of entry from outside to in is especially important.