SEOUL—Korean animal protection groups have joined forces with Humane Society International/Korea to save 50 dogs from being euthanized on a dog meat farm in Yongin city after the facility was closed down by the authorities. The dogs were found by the rescuers locked up in barren metal cages without water or proper food, after the four farmers running the farm had moved off the property following a demolition order by local officials. The farm had been operating in breach of the national Animal Protection Act. HSI/Korea, LIFE, KoreanK9Rescue and Yongin Animal Care Association stepped in and worked together with the local authorities to save the dogs so that the structures could be demolished. These rescued dogs, along with dozens rescued from previous operations, are currently being cared for in South Korea, but will soon be sent to Canada and the United States for further assessment, veterinary care, rehabilitation and eventually adoption.

Nara Kim, HSI/Korea’s campaign manager, said “These dogs really needed our help because they would have been euthanized by the authorities without a rescue plan. We knew we had to act fast to save them, so it was wonderful that HSI, LIFE, KK9K and YACA all worked so well together as a team to get these dogs out. These efforts show how much passion there is in South Korea to end the dog meat industry. These dogs were in a pitiful state, skinny and frightened and existing in terrible conditions. It was shocking to see the slaughter area on site too with abandoned electrocution equipment and knives. I am horrified to think how many dogs lost their lives there. The sooner we can end the dog meat industry, the sooner we can see an end to such pitiful scenes of animal suffering.”

Ewa Demianowicz, senior campaign manager for HSI/Canada, said: “We are happy to help our colleagues in South Korea end the cruel dog meat trade by welcoming the dogs rescued from these horrible facilities at our emergency shelter near Montreal. HSI/Canada will provide veterinary and behavioural care for these dogs and will, seek loving adoptive families for them. These dogs have endured tremendous suffering and our team is thrilled to be bringing them to safety and helping them recover from their physical and psychological trauma.”

In-Seob Sim, president of LIFE, said: “It has been 30 years since the Animal Protection Act was established in Korea, however still so many animals are not protected properly. Government officials should make and implement policies to ban the slaughter of dogs for food. We should no longer subject this misery on future generations of dogs.”

Hyun Yu Kim, founder of KoreanK9Rescue, said: “It is significant that all these dogs are being given the chance of a new life instead of being euthanized or killed at the slaughter house. However, there are still countless dogs out there bred for meat who are still suffering. We are calling for urgent action from the government to introduce laws to ban the dog meat trade and protect dogs like these.”

Miyeon Ki, Yongin Animal Care Association, said: “I am overwhelmed by this life-saving mission for the 50 dogs who have escaped first the crisis of brutal slaughter for dog meat and then the threat of death by euthanasia, but have dramatically found a chance to live again. I think the effort to save lives in any difficult situation is the faith of animal rescue group.”

Yang-Jin Cho, Animal Protection Division, Yongin city said: “The city officials really felt bad for these dogs and hoped that something could be arranged to give the dogs the best chance. So we are really happy that these animal groups were able to help and give the dogs a future.”

Humane Society International/Korea, which has closed down 17 dog meat farms in the country, is campaigning for legislation in South Korea to end the dog meat trade. A recent opinion poll commissioned by HSI/Korea and conducted by Nielsen shows growing support for a ban on the dog meat trade, with nearly 84% of South Koreans saying they don’t or won’t eat dog, and almost 60% supporting a legislative ban on the trade. To date, HSI/Canada has sheltered and found homes for over 500 dogs coming from these dog meat farm closures. 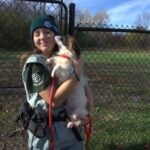 MONTREAL, QC—A total of 196 dogs have been rescued by Humane Society International from South Korean dog meat farms and... 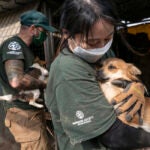 TORONTO–Humane Society International/Canada (HSI/Canada) and Friends of HSI (FHSI) are partnering with Toronto Community Housing (TCHC) to support residents with... 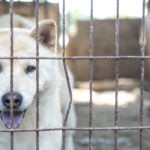 MONTREAL—Humane Society International’s rescue team is on the ground in South Korea during National Dog Week to save 90 dogs...