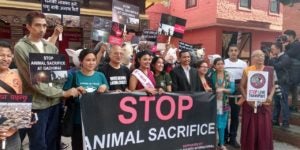 Kathmandu – A rally of multi-faith religious groups, animal welfare organizations, students, teachers and artists took to the streets of Kathmandu to launch the ‘Stop Animal Sacrifice’ campaign. The campaign is seeking a ban on all forms of animal sacrifice in public and private spaces throughout Nepal.

The killing of animals such as buffalo, goats, birds and rats as sacrificial offerings exists across diverse religious, cultural, caste, ethnic and linguistic groups in Nepal. Despite being responsible for the death of hundreds of thousands of animals every year, Nepal lacks a strong law to criminalize animal sacrifice.

The Kathmandu rally, led by Federation of Animal Welfare Nepal (FAWN) in partnership with Humane Society International/Nepal, religious organizations and lawyers’ group, wants all forms of animal sacrifice banned by law, including at temples, festivals and official, religious and cultural events. The campaigners are urging the national, provincial and local governments of Nepal to formulate and endorse the country’s Animal Welfare Act ahead of the month-long Gadhimai festival in November, the world’s largest animal sacrifice that takes place every five years.

Tanuja Basnet, Humane Society International’s Nepal Director, said: “The coming together of multiple stakeholders for this vibrant rally and campaign, including animal welfare groups, temple priests and religious groups, is highly significant to promote compassion to animals and encourage all faiths to support alternative offerings instead of blood sacrifice. It also helps us address the multiple social, economic and educational factors that perpetuate animal sacrifice and other forms of animal cruelty. Together we can make a kinder world for all animals in Nepal.”