Home About Us News & Media One Year Out from 2020 Tokyo, NGOs 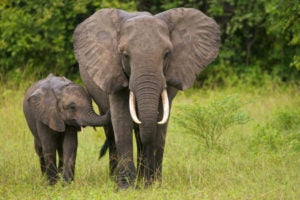 One year before the start of the 2020 Tokyo Summer Games, international and Japanese conservation organizations are appealing to Tokyo Governor Yuriko Koike to ban the sale of ivory in the city. Japan boasts the world’s largest legal domestic ivory market, and its ongoing support for an industry that fuels the poaching of an estimated 20,000 African elephants each year threatens to tarnish the reputation of Tokyo and the 2020 Games.

The Environmental Investigation Agency US, Humane Society International, WildAid, Japan Tiger and Elephant Fund and Tears of the African Elephant urge the Governor to support international efforts to conserve and protect Africa’s rapidly declining elephant population by closing the ivory market in Tokyo prior to the start of the 2020 Games. The city is home to a significant proportion of Japan’s 17,000 registered ivory manufacturers, wholesalers and retailers. With an estimated 10 million tourists expected to visit Tokyo for the games, there is a high risk that many visitors, either intentionally or unknowingly, will buy and illegally export ivory souvenirs from these shops.

In May, New York City Mayor Bill de Blasio appealed to Governor Koike to follow New York’s lead and ban the city’s ivory trade. Thirty-seven members ofthe U.S. House of Representatives also appealed to the Government of Japan to join other nations that have committed to closing ivory markets in a letter they sent via Ambassador Shinsuke J. Sugiyama. In addition, on their own initiative, many private companies including Rakuten, AEON, Ito Yokado, Mercari, Inc., Amazon Japan and Google Shopping Japan have ceased ivory sales or have announced their intention to do so before the Games begin.

Despite evidence of ongoing illegal trade that exploits loopholes in Japan’s regulations, its government has continued to support the domestic ivory trade. This position threatens to undermine bans in other jurisdictions like China, the United States and the United Kingdom. In China, officials have been ramping up their efforts and have seized an increasing number of shipments of ivory from Japan, making it clear that Japan’s domestic market is contributing to illegal international trade. There have been more than 20 seizures of ivory from Japan so far in 2019.

Japan’s ivory trade will face increased scrutiny at the 18thmeeting of the Conference of the Parties to the Convention on International Trade in Endangered Species of Fauna and Flora (CITES), in Geneva, Switzerland next month. The 32 African nations that comprise the African Elephant Coalition are urging Japan and the European Union to close their ivory markets.

Allan Thornton, president of EIA US, said, “Japan’s hold on its domestic ivory trade has the potential to divide nations just as the world comes together for the Olympics. We strongly urge the Government of Japan to close its domestic ivory market and let the global community know it cares about Africa’s iconic elephants.”

Iris Ho, senior specialist for wildlife programs and policy for Humane Society International, said, “There is no better opportunity than the 2020 Summer Games to showcase Japan’s commitment to environmental sustainability, a key theme of the Games. We urge the Japanese government to protect one of the planet’s keystone species by shutting down its ivory market–the largest remaining in the world.”

Masayuki Sakamoto, executive director of the Japan Tiger and Elephant Fund, said“Japan’s domestic ivory market is not only the largest legal market, but also the most open and poorly regulated one. Ivory hanko and wide variety of other ivory products are freely sold on the street and online. None of them can be identified as derived from ivory legally imported before the international ban. Even worse, those ivory products are being produced on daily basis. This market provides a quite useful ‘cover’ for smuggled ivory items as well as an easy place for buying ivory to be illegally exported abroad.”