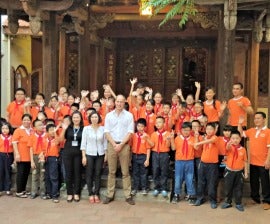 His Royal Highness Prince William, Duke of Cambridge, saw first-hand today the efforts by the government of Vietnam and animal protection organisation Humane Society International to inspire Vietnam’s school children to protect rhinos from devastating poaching by reducing demand for rhino horn. In an event featuring school children from the Hong Ha primary school in Hanoi, Prince William spoke about the need to protect rhinos from poaching and urge the public to shun rhino horn consumption. HSI wildlife Program Manager Adam Peyman read children the book called “I’m a Little Rhino,” written and produced jointly by the Vietnam CITES Management Authority and HSI, and illustrated by Peyman, to teach children about rhino poaching concerns, conservation efforts and to dispel the myth that rhino horn has medicinal value.

Prince William is in Vietnam to attend the Hanoi Conference on Illegal Wildlife Trade, a conference in which participants will call for tangible and unified action against illegal wildlife trade. A week earlier, HSI funded an event in which Vietnam government officials destroyed 2,177.5 kg of elephant ivory tusks and 70.1 kg of rhinoceros horns confiscated from the illegal trade, to permanently remove the products from trade, call public attention to the poaching and trafficking tragedy, and urge people not to buy or use elephant ivory or rhino horn. A rhino is killed for its horn every 10 hours in South Africa, largely to satisfy demand in Vietnam.

Take the pledge to avoid contributing to wildlife suffering.

Teresa Telecky, Ph.D., director of HSI’s wildlife department and author of “I’m a Little Rhino,” said: “We are thrilled that Prince William is helping to bring attention to the plight of rhinos and the dire poaching crisis they face, which is decimating their wild populations in Africa and Asia. Driving the crisis is the demand for rhino horn for its use in traditional medicines and health tonics despite the horn having no medicinal value. Our “I’m a Little Rhino” book educates children about rhinos and the threats to their survival and encourages them to ask adults in their lives not to buy or consume rhino horn.”

HSI has been working with the government of Vietnam since 2013 on a national, government-led campaign to reduce demand for rhino horn in the country. Vietnam is one of the world’s major transit points for and consumers of trafficked ivory and horn. The multi-faceted campaign has reached an estimated 34 million people—approximately one-third of the national population. According to national poll results, over the three years of the campaign, the demand for rhino horn has dropped by 38 percent and the number of people in Vietnam who think rhino horn has medical value has decreased by 25 percent.

One of the campaign’s main priorities is educating children, and “I’m a Little Rhino” is at the heart of the program. The book tells the story from the perspective of a little rhino affected by poaching, and teaches children that poaching is a crime, that the horns have no medicinal properties, and that wildlife must be valued and protected. The book has now been distributed to 700 primary schools and is formally part of the school curriculum.

“I’m a Little Rhino” is the first book in HSI’s “I’m a Little…” series of children’s books and videos, produced through our partnership with the Vietnamese government. Other books include “I’m a Little Elephant,” “I’m a Little Pangolin,” and “I’m a Little Tiger” to reduce demand for products from these animals.

In addition to the schools education project, the demand reduction campaign has focused on Vietnam’s capital city, Hanoi, and engaged stakeholder groups including the 800,000-member Ha Noi Women’s Association, the business and scientific community, university students, as well as leading health experts. The organisation launched advertisements on city centre and airport billboards and on city busses.

Images from the event featuring Prince William are available by contacting the media representative below. Read “I’m a Little Rhino” here, and watch the film here.