Home About Us News & Media HSI/Vietnam calls on South African 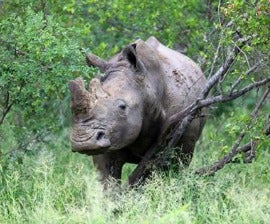 Humane Society International/Vietnam is calling on the South African government to honor its commitment to protect rhinos by refusing permits for an online auction of rhinoceros horns that appears to be targeting buyers from the world’s two largest destinations for trafficked rhino horn, China and Viet Nam.

The auction to be held on 21st August is by John Hume, the world’s largest rhino farmer, and the auction website has both a Vietnamese and Chinese language option in addition to English. HSI believes there is a significant risk that horns from this auction, even if purchased legally in South Africa, may end up being trafficked to Asian consumer markets by organized criminal syndicates. The South African government estimates that a rhino is killed for its horn about every eight hours in South Africa, largely to satisfy black market demand in Vietnam and China.

The horn to be auctioned is ‘trimmed’ from Hume’s 1,500 farmed rhino, and purportedly aimed at the domestic rhino horn trade which is now legal following a ruling in April by South Africa’s constitutional court, lifting a 2009 ban. However, in light of the suspicious language options on the site, the Vietnamese government has reiterated in an official statement that according to Vietnamese law, rhino horn purchased at this auction could not be legally exported to Vietnam for commercial, medical or personal purposes.

Manh Tien Vuong, deputy director of the Vietnam CITES Management Authority, said: “According to Decision 11/2013/QD-TTg dated 24/01/2013, Vietnam prohibits all trade in white and black rhinoceroses and their products with only narrow exceptions for purposes such as law enforcement, political, scientific research, and zoological display.”

This auction comes at a time when rhino poaching is at crisis point, with poachers killing 1,054 rhinos in South Africa last year, according to the government. HSI believes that any trade such as this auction will encourage poaching, and that any exported horns will be difficult if not impossible to monitor. Horns illegally obtained through poaching can all too easily be laundered into the legal market, circumventing efforts to protect threatened rhino populations.

Phuong Hong Tham, executive director of HSI/Vietnam, said, “Amidst an ongoing rhinoceros poaching crisis, HSI and the government of Viet Nam have been cooperating successfully to reduce demand for rhino horn within Vietnam. While this auction seems intent on targeting Vietnamese and Chinese nationals, HSI stands with the government of Vietnam in sending a strong message that rhino horn has no medicinal benefits, consumption and ownership of it contributes only to the extinction of rhinos, and those caught smuggling rhino horn into Vietnam will face up to 15 years in prison. We hope that the South African government will play its part by denying permits for this auction to go ahead.”

Regulations to manage South Africa’s recently-legalized domestic trade in rhino horn still do not exist, and the proposed regulations rely too heavily on provincial South African authorities that have historically been wrought with corruption.

HSI/Africa’s executive director, Audrey Delsink, says: “South Africa’s legalised domestic rhino horn trade is a disaster waiting to happen. The proposed system will be all too easily taken advantage of by poachers and traffickers, who can bribe corrupt officials to launder horns from poached rhinos into the legal market. It is in the best interest of both South Africa and Vietnam, and of course the future survival of rhinos, that this auction does not proceed. It sends entirely the wrong message about trade in rhino horn, and threatens to undermine years of work by the government of Vietnam, Humane Society International and others to reduce demand in rhino horn.”