London–Humane Society International’s rescue team is on the ground in South Korea to save more than 90 dogs and puppies from the horrors of a dog meat farm, with seven lucky pups destined to fly to the United Kingdom to seek adoptive homes. The remaining dogs are being flown to the United States and Canada. TV vet, animal welfare campaigner, and founder of PupAid Marc Abraham, and world-respected dog trainer and star of Animal Planet’s “It’s Me or the Dog” and Channel 5’s “Dogs With Extraordinary Jobs”, Victoria Stilwell, flew out to South Korea with HSI to witness the rescue first-hand.

During their trip, Victoria and Marc also joined the HSI team as special guests of the British Ambassador Simon Smith for a gallery exhibition about the charity’s dog farm rescue work, at which the Ambassador praised the charity for working collaboratively with dog farmers wanting to exit the cruel trade.

Download broll video and photos of the rescue here.

The dogs were living on a dog meat farm in Gyeonggi-do province that is closing thanks to HSI’s pioneering program that sees the charity help dog farmers who want to leave the increasingly controversial industry. This is the 15th dog farm HSI has permanently closed, and one of thousands of such farms across the country supplying live dogs to slaughterhouses and markets for human consumption.

Seven of the rescued dogs will fly to the UK where they will begin their search for adoptive homes. Winston the Boston Terrier, Labrador mixes Pumpkin and Oscar, spaniel mix Maisy, terrier Scooby, and Jindo mixes Bella and Molly, were among the more than 90 dogs destined to be sold to the butcher before the dog farmer – 40-year old Kwon Tae-young – had a change of heart and asked to join HSI’s dog farm closure program, the only campaign of its kind in South Korea helping farmers leave dog farming behind them to set up more humane and profitable livelihoods.

Victoria Stilwell said: “It’s been a real privilege to join Humane Society International’s team in South Korea and see their dog meat farm closure program for myself. I’ve seen all breeds of dogs here suffering the same, kept in filthy cages with no environmental enrichment whatsoever. It’s little wonder that they seem so desperate to escape. The agreement that HSI reaches with the dog farmer truly is a lifeline for these dogs.”

Vet Marc Abraham, who campaigned successfully to achieve a ban on puppy farming in England, Wales and Scotland (known as Lucy’s Law), said: “I’m really in awe of the resilience of these beautiful dogs. They endure miserable lives in squalid conditions with just the bare minimum to keep them alive, and no veterinary care whatsoever, and yet so many of them still wag their tails and jump with excitement when shown the slightest bit of affection. Any factory farm for dogs is a hellish place, bethat for the pet trade or the meat trade, and HSI’s program is making a massive difference here to pave the way to end this cruel industry for good.”

The tosa and jindo breeds more typical of the trade were kept at the farm alongside a chow-chow, golden retriever, several terrier mixes and two Boston terriers, all destined for the cooking pot, with most enduring a miserable life in cramped and barren wire frame cages, while others were chained up alone.

Like all the dog farmers with whom HSI has worked, Farmer Kwon Tae-young is eager to leave his dog breeding days behind him. His business is increasingly unprofitable as fewer people in South Korea wish to eat dogs, and he feels happy to know that his remaining dogs will escape the grim fate of fighting or slaughter.

Farmer Kwon Tae-young said: “I’ve thought about closing my dog farm for a while now for various reasons, but never actually did anything about it. I have lost more money on this dog farm than I have made, and I feel like the dog meat industry in South Korea has already ended really because it’s the worst of the worst times for dog farmers I think. One day I talked to a former dog farmer who had worked with HSI and he recommended I work with the charity to help me leave the dog meat industry. When I heard that HSI would help find forever homes for the dogs instead of them being euthanized, that’s when I decided to do it. Rather than selling them off to traders, I thought it would be so much better if they can live their life and not die for meat or live the life of a fighting dog. That is why I’m working with HSI.”

HSI’s unique program sees the charity work with dog farmers to rescue their dogs and transition their businesses to more humane and profitable enterprises such as crop growing or service trades like water delivery. A 20-year contract is signed by each farmer stipulating they must not breed dogs or any animals again, and the cages are demolished to ensure that no animals will suffer on the property in future. As political and public momentum grows in South Korea to end the dog meat trade, HSI’s strategy points to the cultural need for a solution that works for both people and dogs caught up in the industry. The charity hopes its program will demonstrate to the government that its phase-out model can be adopted nationwide with state support, and buy-in rather than opposition from farmers.

Nara Kim, HSI/Korea’s dog meat campaigner says: “All animals can suffer for the meat trade, but we have a unique set of social and political circumstances in South Korea that means we have a chance of ending that suffering for millions of dogs, as appetites and attitudes towards dog meat are changing. More Koreans than ever before are speaking out against the dog meat industry, and pressure is building on the government to make a plan to phase out this cruel business. As a Korean myself, I know what a difference HSI’s dog farm transition program can make in hastening an end to the suffering. ”

Dog meat consumption is declining rapidly in South Korea, particularly among younger generations, with a survey by Gallup Korea in June 2018 showing that 70 percent of South Koreans say they will not eat dog meat in future. A series of recent moves by authorities to curb the dog meat trade reflects how Korean society is increasingly ill at ease with the industry. In November last year, HSI/Korea assisted Seongnam City Council in shutting down Taepyeong, the largest dog slaughterhouse in the country, and in July this year HSI/Korea worked with fellow Korean animal groups and Busan city council to close down Gupo dog meat market.

Speaking at the British Embassy dog meat rescue gallery exhibition, Ambassador Smith said: “We have been delighted to host a reception for Humane Society International at the Embassy, to bring attention to their work tackling the animal welfare problems of the dog meat trade. HSI’s approach is commendable and clearly effective, working collaboratively with dog farmers keen to leave the trade behind them, and supporting their willing transition to alternative humane livelihoods. We also congratulate the city councils of Seongnam and Busan with whom HSI have worked recently to close dog meat markets, a move that we understand has been welcomed by the local communities. Improving animal welfare is a global challenge and opportunity, for all animals, and we welcome the progress that has been made for dogs here in Korea.”

Download photos of the British Ambassador with a jindo puppy, saved by HSI from the dog meat trade, here.

The seven dogs destined for the UK will first complete their quarantine at Humane Society International’s shelter partner in South Korea, after which they will be flown to the UK at the end of November to be placed in foster families by HSI shelter partner Chimney Farm Rescue in Surrey. Prospective adopters can apply to Chimney Farm Rescue via https://www.chimneyfarmrescue.com/

Download broll video and photos of the rescue here. 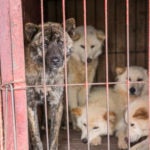 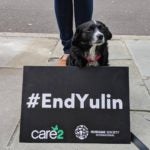 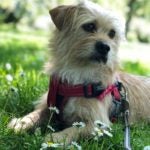