HSI is fighting the cruel dog meat trade in countries across Asia. Here’s how we’re working to achieve change. Please take action and donate to help dogs and other animals.

Ending Asia’s dog meat trade for good poses complex challenges that require a genuine understanding of the situation on the ground and a multi-layered strategy. HSI’s primary focus is on the dog meat trade in China, South Korea, Indonesia and Viet Nam.

In South Korea, Viet Nam and Indonesia, we have HSI team members living in-country to pursue legislative change and action for animals. In China, we support the efforts of numerous animal protection groups and shelters in campaigning, public education and hands-on rescue. 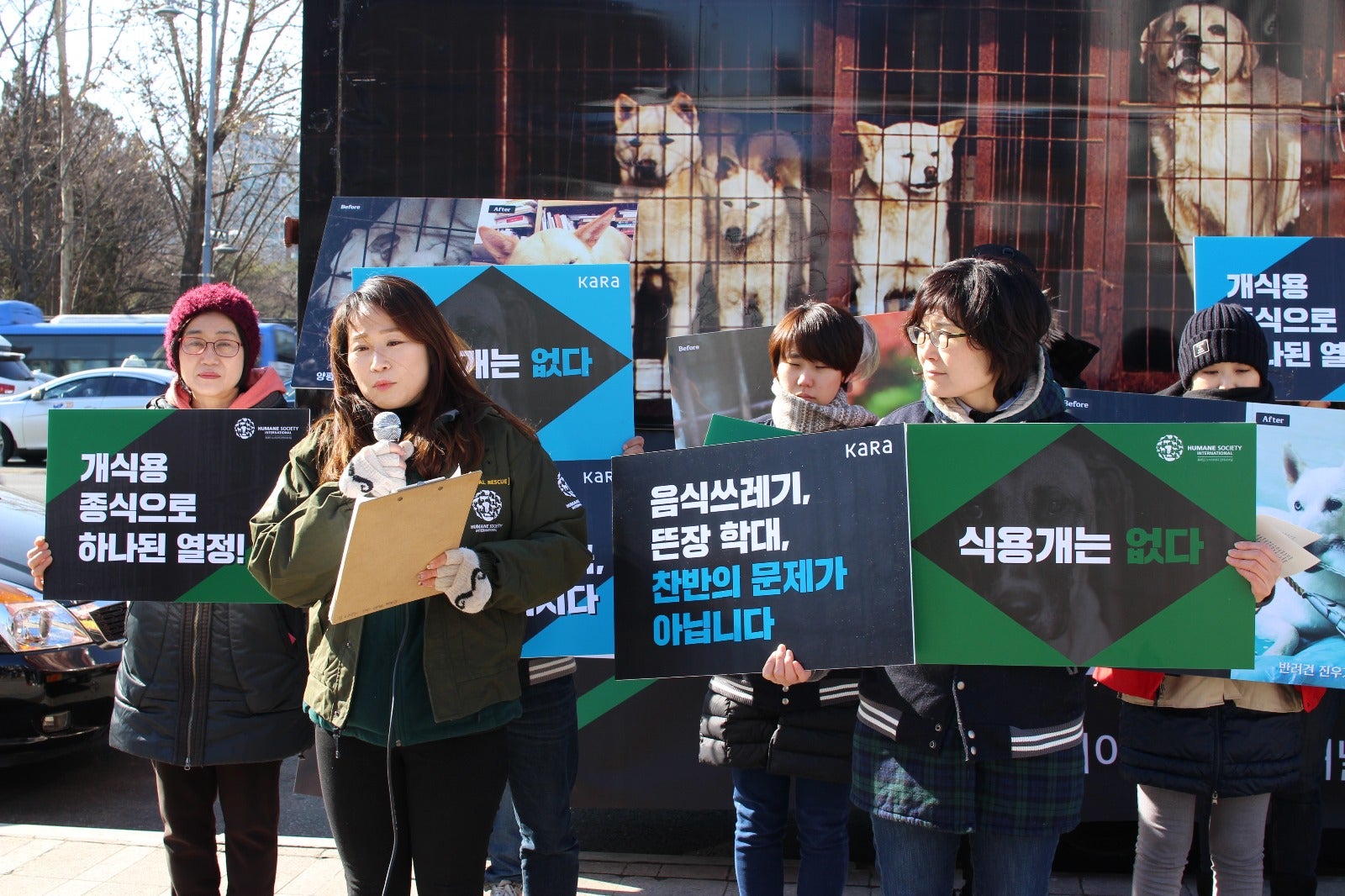 Our goal is to advance laws to ban the dog and cat meat trades. In South Korea, we are urging the national government to commit to a phase-out of dog meat farming, and working with policy makers who are in favour of reform. In Indonesia, as part of the Dog Meat Free Indonesia (DMFI) coalition, we work with local law enforcement to stop dog traffickers and close down slaughtering operations, and encourage local governments to introduce dog meat bans, while petitioning the government for a nationwide ban, in accordance with national sentiment that “dogs are not food”. In China, although the law doesn’t permit foreign NGOs to lobby the government directly, the Chinese animal groups that HSI supports, actively engage with policy makers and officials to crack down on the trade. We very much hope that the time will soon come when the National People’s Congress supports advances robust animal welfare legislation. With bans on the dog meat trade already in place across Hong Kong, Thailand, the Philippines, Taiwan and Singapore, as well as the cities of Shenzhen and Zhuhai in mainland China, Siem Reap province in Cambodia, and 14 cities and regencies in Indonesia, achieving an end to the trade across Asia is a realistic goal.

Additionally, HSI works co-operatively with the Foreign and Commonwealth Office in the United Kingdom to progress meaningful action and has played a key role in helping to shape recent Congressional Resolutions in the United States. 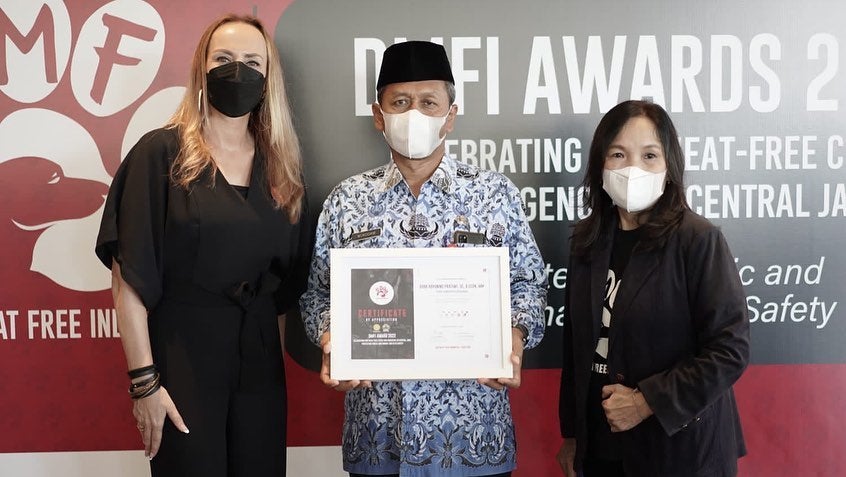 With millions of dogs and cats suffering for the meat trade across Asia, rescue alone is not a solution to end this cruel business. However, where we are able to save lives, we and our partners swing into action.

If you believe that dogs shouldn’t suffer and die for the trade in their meat, sign now to stand with us.

HSI/Korea has rescued more than 2,500 dogs from dog meat farms and markets in South Korea. They have all suffered being intensively bred on farms in small, metal, barren cages with little food or water, left exposed to the harsh elements and with no veterinary care. HSI works with farmers who want to leave the cruel trade behind them, closing down their dog meat farms and flying the dogs to freedom in the United States, Canada and the United Kingdom. Through a network of Shelter and Rescue Partners, the dogs are prepared for adoption into loving homes. They serve as ambassadors to help raise awareness of this issue. Back in South Korea, we work with the farmers to help them move on, either by transitioning to new humane livelihoods such as water delivery or vegetable farming, or in the case of very elderly and infirm farmers, retiring from work. In both cases, permanently closing their dog meat farms saves not only the dogs we rescue at the time but also ends the cycle of suffering by preventing many hundreds more from ever being born into the cruel trade in the future. At the same time, we’re demonstrating to the Korean government that phasing out the industry is a feasible solution. 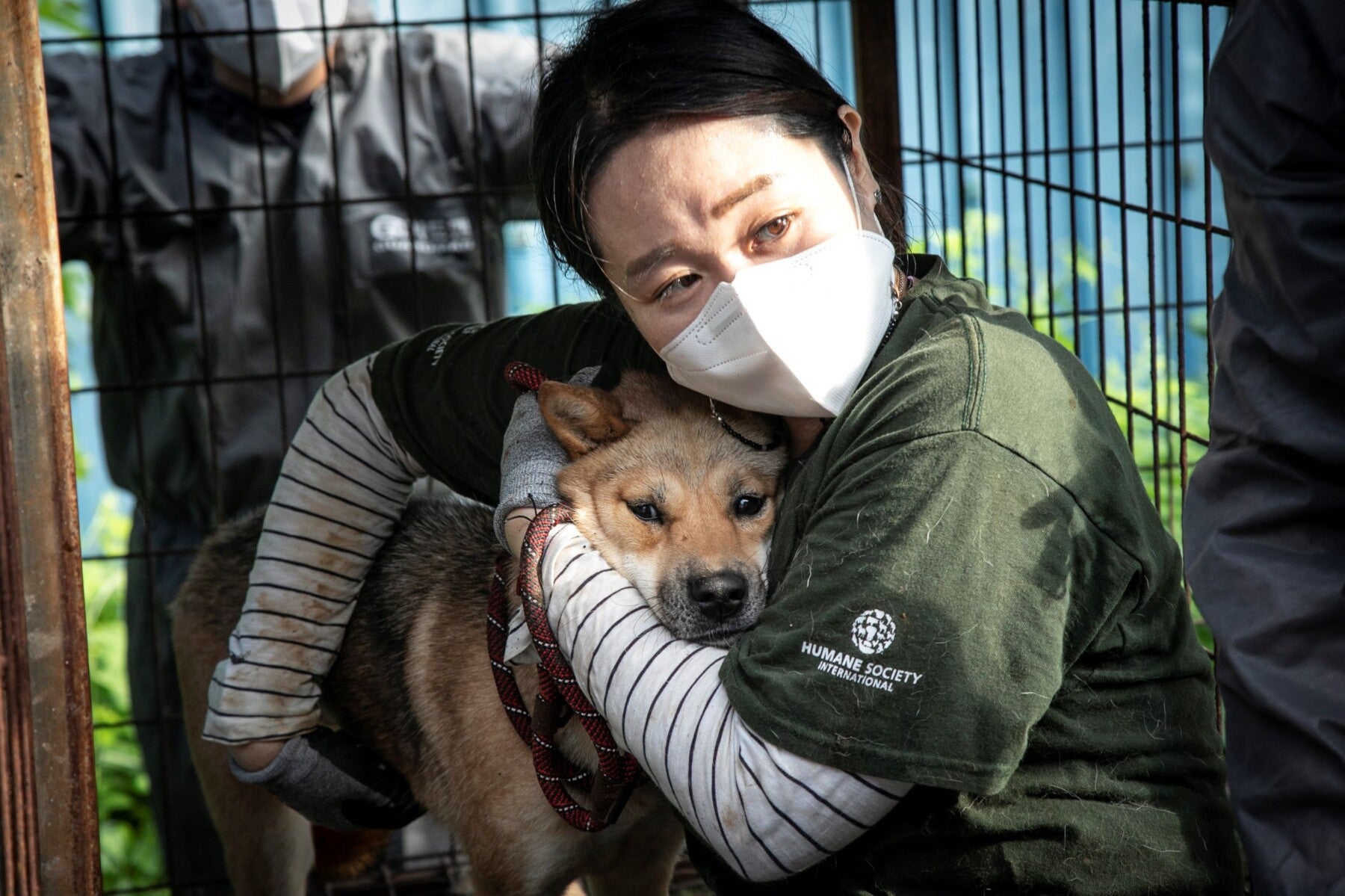 In China, HSI supports the work of local groups who liaise with the police to pull over trucks on the highways crammed with dogs and cats on their way to slaughterhouses. As these animals are largely illegally acquired from the streets and their homes, as well as illegally transported across provincial borders without the necessary paperwork, intercepted trucks can be seized by the police and the dogs confiscated. Our partner groups provide immediate lifesaving water and care for the animals who will have been driven for days or even weeks to reach the slaughterhouse. Many of them will be sick from disease, dehydration or heat stroke, or injured with wounds to their paws or even broken bones. Our supporters’ donations have helped bring top-quality veterinary care and safe sanctuary at HSI-funded shelters to these animals so that they can recover and learn to trust again. 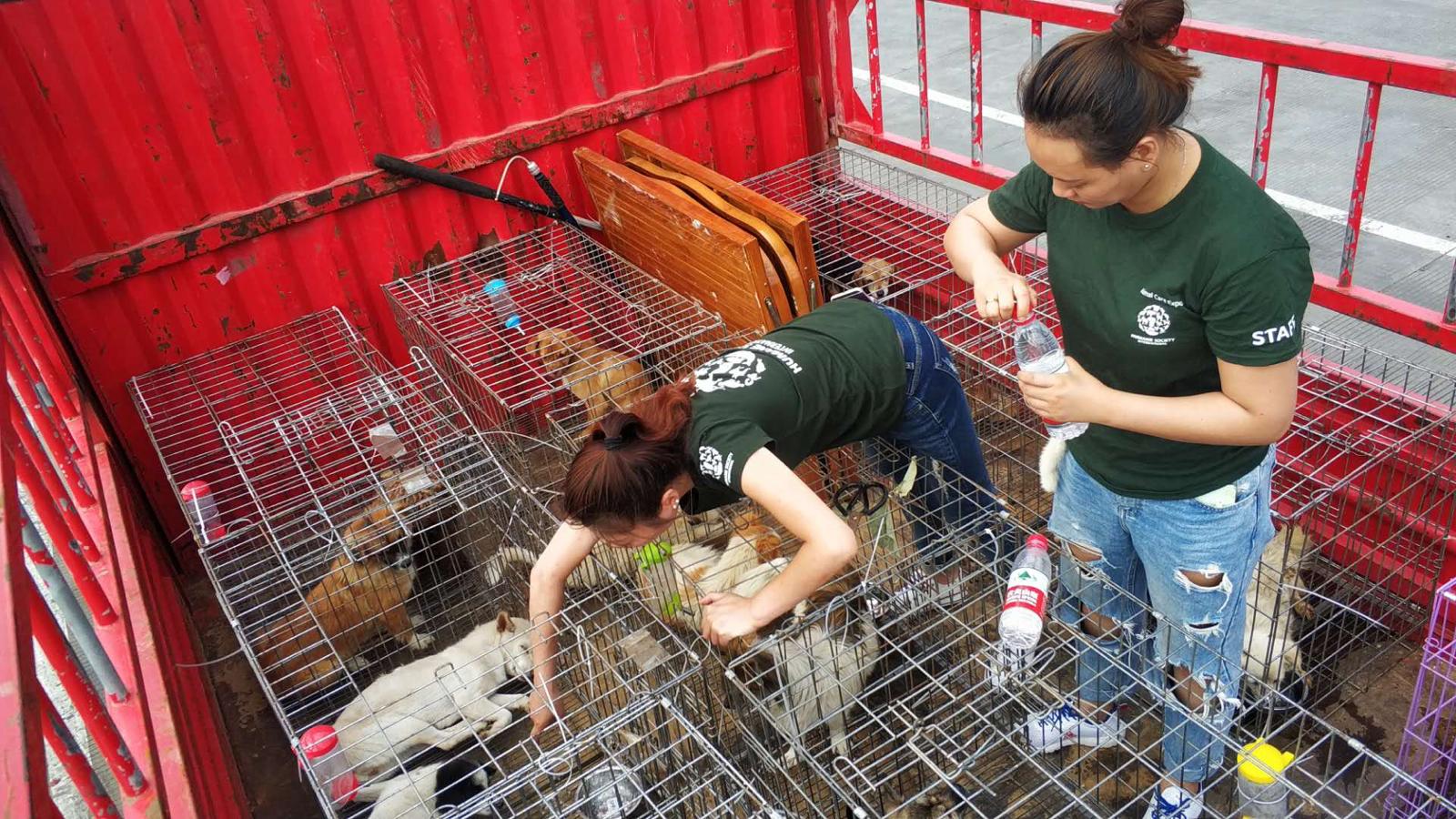 Stopping the dog thieves and traffickers

Criminal activity underpins the dog meat industry across much of Asia, yet convictions are extremely rare. HSI wants to see improved law enforcement as a priority to deter dog traffickers, protect vulnerable animals and increase arrest and conviction rates for dog trade criminals. In Indonesia, more than one million dogs are still illegally stolen, trafficked, slaughtered and sold for human consumption every year. Without a nationwide ban, the relevant laws and regulations that can be applied have weak penalties, and enforcement is rare, which enables the traders to continue to operate. DMFI campaigners work with law enforcement as well as local and regional officials to introduce bans and help the authorities crack down on the criminals. As a direct result of this strategy, we’ve worked with police to intercept trucks smuggling dogs, and seen the country’s first ever convictions for dog traffickers. 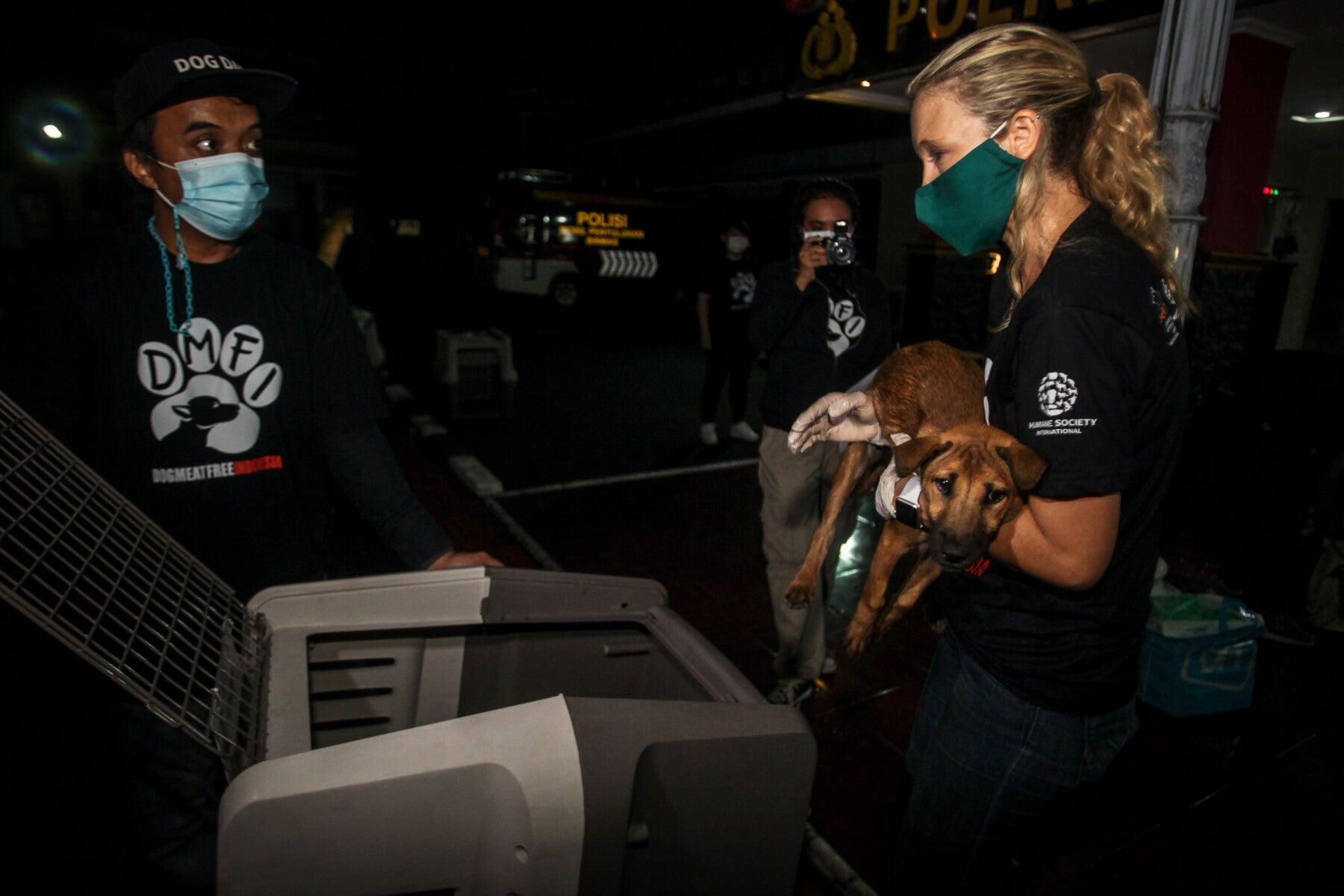 Our work shining a spotlight on the suffering endured by dogs and cats for the meat trade is a powerful tool in changing hearts and minds. In South Korea, our strategy of inviting Korean media to attend our dog farm rescues and witness the conditions first-hand has shone a much-needed spotlight on the cruelty. Showing the grim reality of the industry to the public and politicians has contributed to increased support for a ban. Likewise, in Indonesia our DMFI investigations have exposed the appalling cruelty endured by these animals, including those at markets where they are routinely bludgeoned and blow torched in front of each other. Our investigations result in national and international media headlines, which, in turn, support our campaign work on the ground and increase momentum for change. 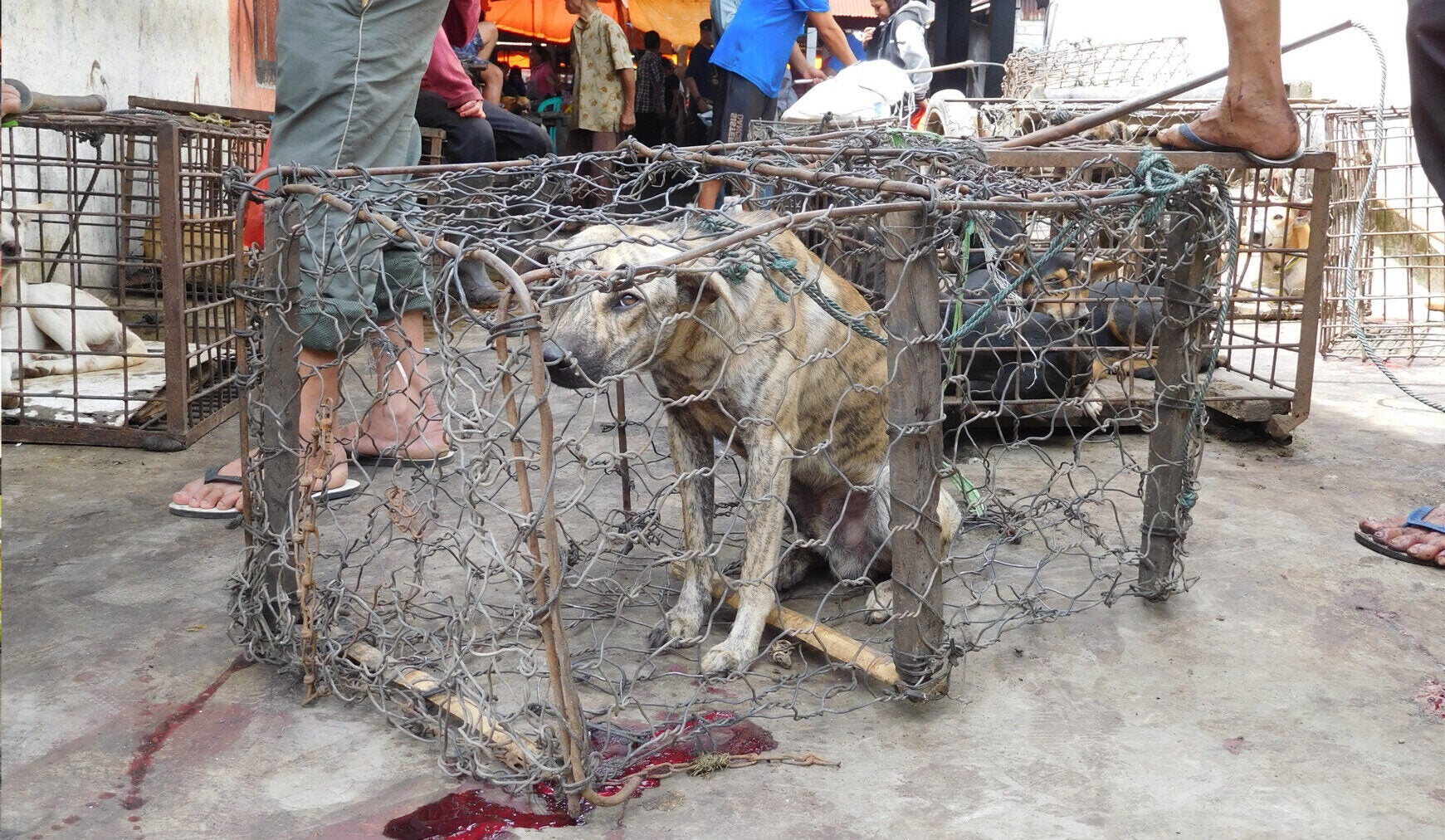 Most people across Asia don’t eat dog and cat meat, and do increasingly support an end to the trade, particularly where public campaigning has led to a greater awareness about the cruelty involved. In South Korea and Indonesia, for example, there is dwindling interest in dog meat consumption, particularly among the younger generation who view dogs as companions, not food. Together with our partner groups such, as KARA in South Korea and DMFI in Indonesia, HSI participates in public peaceful demonstrations of support for protecting dogs from this cruelty as well as eye-catching, nationwide PR campaigns. Community outreach and highlighting the special nature of dogs as our companions are also part of our strategy to promote a public insistence for the end of the dog meat trade. 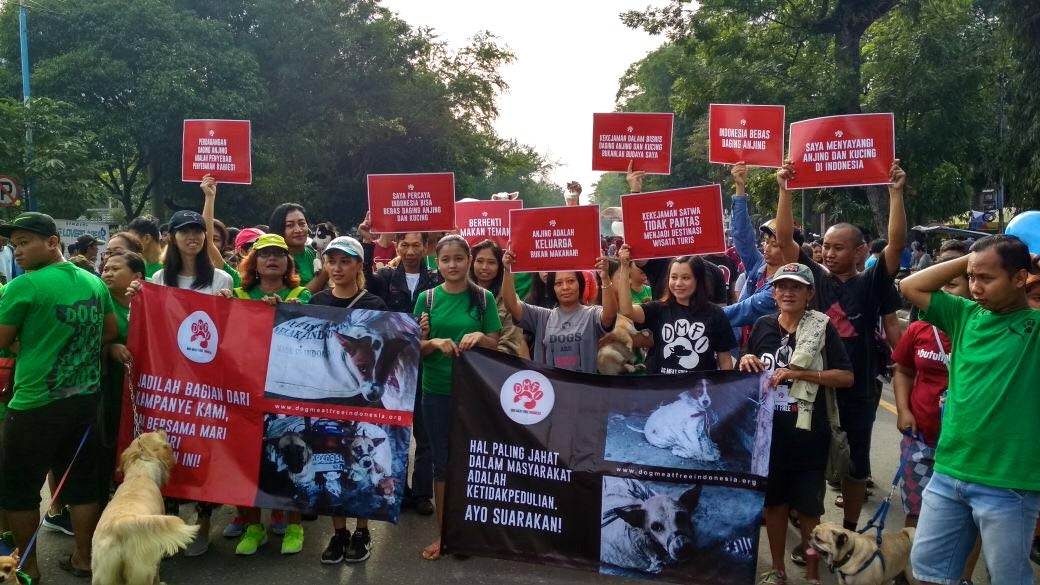 A promise to keep fighting