LONDON—The Swedish government has today announced it will  suspend mink fur farming throughout 2021, in the wake of the SARS-CoV-2 virus having been found on 13 mink farms in Sweden so far. Sweden has approximately 40 mink fur farms and produced around 500,000 mink pelts in 2020.

Humane Society International, which campaigns globally for an end to the fur trade, welcomes the news but urges the Swedish government to permanently end the cruelty and public health risks by permanently ending fur farming. Thus far the government has said breeding mink will not be culled. In December, HSI published a white paper highlighting the link between fur farming, poor animal welfare and infectious zoonotic disease.

Dr Joanna Swabe, senior director of public affairs for Humane Society International/Europe, says: “While we applaud the Swedish government for taking the decision to suspend mink farming, we urge it to go further and permanently shut down this cruel and dangerous industry. Confining millions of animals to small wire cages for fur production not only causes terrible suffering and deprivation, but scientists have also concluded that they could represent a serious reservoir for SARS-CoV-2 and thus pose a very real risk to public health. The Swedish authorities have also recognised that the biosecurity measures taken so far have proved insufficient. We call on all Member States where fur farming persists to shut down this sector for good. For as long as the exploitation of animals for fur is tolerated, the potential for reservoirs of animal to human pathogens will persist. Sweden has taken an important step but must now prioritise human and animal welfare over the frivolous fur fashion industry by permanently making fur history.” 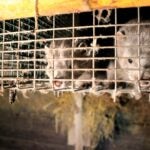 AMSTERDAM—The Dutch Government has today said it will consider a one-stop voluntary closing scheme and breeding ban for mink fur...

AMSTERDAM—Dutch MPs voted overwhelmingly today in favour of shutting down the estimated 128 remaining mink fur farms in the Netherlands,...