Home About Us News & Media Tusk-bracing to save “problem 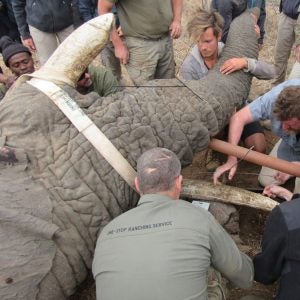 South Africa’s elephant population of approximately 24,000 is protected within enclosed game reserves and national parks. At around 12-15 years old, male animals leave their herds in search of a new home range and unrelated females. As they disperse, they sometimes encounter fences, resulting in conflicts with humans.

Repeat fence-breachers are often referred to as “problem” elephants and their control is guided by the 2008 Norms and Standards of Elephant Management in South Africa. The mitigating action most commonly adopted is to kill the animal.

Support our efforts to protect wildlife.

HSI/Africa is advocating for the use of non-lethal, alternative methods such as the use of tracking collars and notification systems. Recently, HSI/Africa and our local partner, Global Supplies cc, collared and facilitated the first “tusk-bracing” intervention on a wild, free-roaming elephant bull.

A conditioning technique to reaffirm the negative consequence of making contact with and trying to breach fences, it may prove to save many elephants who would normally be destroyed—especially crucial where the bulls in question are dominant, iconic or important for genetic variability.

Q: Who first came up with this idea?

Q: How did you get permission to do it?

A:A proposal was submitted to the reserve, and we were granted permission to trial the method on the elephant.

Q: How was the elephant chosen?

A: This elephant is one of the most dominant bulls within this population. As such, he is incredibly important within the bull hierarchy and the reproductive behaviour and natural selection of the cows. He has been demonstrating fence-breaching behaviour which stemmed from, amongst other causes, fencing him out of an area that he had previously been using for 15 years. The normal course of action would be to class him as a “problem” elephant and have him destroyed. However, we have collaborated with the reserve and have deployed this methodology to mitigate the fence-breaching behaviour and hopefully spare him.

Q: How was he caught?

A: We combined the intervention with our annual elephant immunocontraception vaccinations conducted from a helicopter. The bull was darted with a sedative and once he was down, we moved in with the ground crew and vet to conduct the procedure.

Q: How was the wire applied?

A: Wire is embedded into the tusk with contact under the lip so that when the elephant attempts to break electrified fences with his tusks, the tusk wire acts as a conductor and the elephant receives a shock. The process of embedding the wire does not cause the elephant any pain and is conducted under sedation.

Q: What was his reaction on waking?

A: He was as cool as a cucumber. He stood up, urinated and ambled off. Its noteworthy that he was in full musth at the time. Musth is a condition of a surge in testosterone and is usually coupled with increased aggression. However, this bull remains incredibly relaxed. Watch a video.

Q: How has he been doing since then?

A: The satellite collar we deployed has enabled us to monitor him very closely. He has been seen mating with a cow and has been observed by the monitoring team and game drives. He seems completely unaffected by the presence of the collar or the tusk-bracing.

The tracking collar technology with notification systems sends an alert when a potential “problem” elephant is nearing a boundary fence. This affords managers time to react and prevent the animal breaching the fence using different intervention techniques. The bull’s movements have been monitored remotely via the satellite collar supplied and deployed by Global Supplies. The tusk-wiring worked and the fence-breaking activity was significantly curbed.

Q: Is there any concern he’ll have trouble competing for a female or otherwise become outcast?

A: Definitely not! The tusk-brace is just a tool to reaffirm the negative association of electric fences. It does not affect behaviour or dominance in any way.

Q: What is the reaction of the local people?

A: The bull is an icon for this reserve. In general, there is positive support. The concept is sound and should work but co-operation on the ground is needed. Fences must be adequately maintained and electrified in order for this to work.

Q: What is the testing timeframe?

A: We are currently in the height of winter and have just come out of the worst drought in decades. The testing period must be at least six months, when we move into the summer rainfall period, and conditions improve. As mentioned above, its a conditioning technique, so in theory, one he has been shocked a few times, he should realise that his tusks no longer work to snap the fences and hopefully that breaks the behaviour.

Q: Are there plans do to more?

A: Yes. We want to try and replicate this as a tool to mitigate human-elephant conflict. Normally, such bulls are shot, but [by dispersing in search of females and territory] they are only doing what is biologically hardwired in them. We cannot do anything about the fences that enclose elephant populations, but we can try and save elephants by deploying this technique and teach them to once again respect the fences. Give now to help save elephants and other animals.