Home About Us News & Media After legal loss, Trump Administrat

WASHINGTON — After a key legal defeat, the Department of the Interior told a federal district court in New York late Friday that no future meetings of the International Wildlife Conservation Council (IWCC) will take place, bringing an end to the controversial council.

Environmental and animal advocacy groups sued over the IWCC—composed largely of hunting and gun advocates—and chartered by the Trump Administration to advise on the trophy hunting of elephants, lions, and other threatened wildlife. The court recently rejected the administration’s motion to dismiss that case.

“The IWCC’s disbandment is a huge victory in the fight against the Trump administration’s illegal advisory bodies, said Democracy Forward senior counsel Travis Annatoyn. “But the fight isn’t over.”

Democracy Forward is representing the Natural Resources Defense Council, the Center for Biological Diversity, the Humane Society of the United States and Humane Society International in a lawsuit challenging the legality of the IWCC under the Federal Advisory Committee Act (FACA). The disbandment announcement came on the heels of a slew of FACA lawsuits against the administration.

“I have little doubt our litigation spurred the administration’s decision to abandon the IWCC and walk away from its biased and un-transparent practices,” said Zak Smith, international wildlife conservation director for the Natural Resources Defense Council. “We’re glad the Trump administration is closing shop on this ridiculously misguided council and we await a full accounting of its tainted work product.”

Disbanding the council is a step forward for wildlife, but the IWCC’s advice, reports, and recommendations also violate FACA and legally cannot influence Interior’s decision-making. Federal law requires government advisory panels to be in the public interest, fairly balanced and protected against improper influence by special interests.

“The end of Trump’s thrill-kill council is a huge victory for elephants, lions and other imperiled animals targeted by trophy hunters,” said Tanya Sanerib, international legal director at the Center for Biological Diversity. “It’s still critical to address this biased committee’s past legal violations and prevent self-serving advice from trophy hunters from poisoning federal wildlife policies.”

The council met five times since its creation in 2017, but the Trump administration has allowed the IWCC’s charter to lapse, meaning it can no longer use taxpayer dollars to convene.

Interior’s filing was submitted as Safari Club International’s Reno, Nevada convention kicked off where the organization auctions off numerous hunting trips, including many targeted at imperiled foreign species.

“SCI’s use of taxpayer dollars to unduly influence international wildlife policy has come to an end, in yet another sign that the unsustainable and inhumane trophy hunting industry is closer to becoming a thing of the past,” said Anna Frostic, senior vice president for programs and policy for Humane Society International and representing the Humane Society of the United States.

Former Interior Secretary Ryan Zinke created the IWCC in November 2017 with a mission of promoting the benefits of international trophy hunting. Trump’s Interior Department rejected all nominations from conservation, public interest, or science groups, and instead stacked the Council with friendly political donors, firearm manufacturers and advocates for trophy hunting, many of whom stand to benefit from changes to federal policy.

The Humane Society of the United States:

Founded in 1954, the Humane Society of the United States and its affiliates around the globe fight the big fights to end suffering for all animals. Together with millions of supporters, the HSUS takes on puppy mills, factory farms, trophy hunts, animal testing and other cruel industries, and together with its affiliates, rescues and provides direct care for over 100,000 animals every year. The HSUS works on reforming corporate policy, improving and enforcing laws and elevating public awareness on animal issues. More at humanesociety.org. 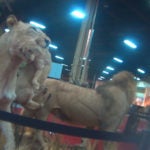 WASHINGTON — Thousands of trophy hunters from around the world will gather next week in Reno, Nevada (February 5 through...