Home About Us News & Media VIDEO: Dog meat found on sale at Sh 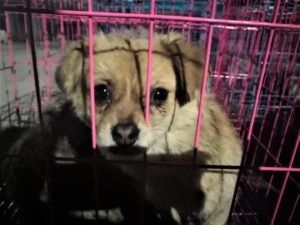 WASHINGTON – As Shanghai prepares to host the 2019 World Dog Show despite global condemnation of China’s brutal dog meat trade, Chinese campaigners have exposed the sale of dog meat at restaurants in the same city as the major canine event.

In addition to identifying the restaurants, Humane Society International’s partner group in Shanghai also rescued 22 dogs from one of the restaurant’s slaughterhouse suppliers. The dogs – including a poodle and a French bulldog – are suspected to be stolen pets much like those being celebrated at the World Dog Show. The exposé demonstrates the troubling double standard in the way that dogs are treated in China, says Humane Society International, as the charity renews its call on the Chinese government to end the dog meat trade ahead of the infamous Yulin dog meat festival in June.

The World Dog Show starts on 30th April and bills itself as a “Joyful gathering for dog lovers and lovely dogs across the world!” However, less than 20km from the Shanghai World Expo Exhibition & Convention Center where attendees will gather to celebrate their canine companions, Humane Society International’s partner group discovered three restaurants serving up dog meat soup for human consumption.

One of the restaurants displayed several dog meat dishes on its menu and also advertised dog meat in its window, with a sign boasting that its dog meat is supplied by slaughterhouses in Xuzhou city, notorious for the country’s biggest dog meat processing industry in Peixian county, Jiangsu Province (north of Shanghai). When the activists travelled to Peixian and visited one slaughterhouse, they discovered 22 dogs cowering in the corner of the facility having just witnessed their cage mates being beaten to death.

As there were several clues that these dogs were likely stolen pets, including a pile of dog hair and pet collars discarded in the corner, the activists were able to negotiate their release and swiftly rescue them.

Dr Peter Li, Humane Society International’s China policy expert, says: “This investigation exposes the horrifying way that millions of China’s dogs are abused for the meat trade while others are pampered for the pet trade, with those two worlds colliding when pet dogs are stolen from back yards and the street to be brutally killed for human consumption. The slaughter operation where the 22 terrified dogs were rescued could easily have supplied the Shanghai restaurant that claimed to get its dog meat from Xuzhou. Most of the rescued dogs are small, lap-dog breeds typical of pets in China, and the activists found a pile of collars in the corner of the slaughterhouse, so there is every likelihood that these dogs were stolen pets. It’s a double standard that enrages many dog lovers throughout China, who are frustrated at how this illegal trade is allowed to continue.

“Most people in China don’t eat dogs, and in fact the World Dog Show in Shanghai is a prime example of a growing, younger, and more affluent Chinese population who love their canine companions and despise the dog thieves who steal their friends for the meat trade. It also demonstrates the huge economic benefit to China of this booming pet care industry, versus a dog meat trade that acts only as a stain on China’s international reputation. We urge China to act to end its brutal dog meat trade.”

Mr. Tian, one of the Shanghai activists, said: “Peixian in Jiangsu’s Xuzhou City is notorious in China, producing processed dog meat such as dog meat sausages, canned and dried dog meat, mainly for local restaurants. But it also ships frozen dog meat further afield. Had we not rescued them, the 22 dogs we found could very easily have been killed and served up at the restaurant in Shanghai near where dogs just like them are being shown at the World Dog Show. The dogs were clearly terrified, but they all responded to human kindness and sought our comfort, which is a typical sign they were once someone’s pet. We want the world to know that most Chinese citizens don’t eat dogs or support this horror. It is not our culture, it is a crime.”

The rescued dogs were accepted into an animal shelter in North China where HSI funding will help support their veterinary care and rehabilitation in preparation for being put up for adoption. The 22 dogs were given a full health check and treated for minor injuries, skin diseases and shock, before being settled into their new temporary home. In time, the shelter will hold a special adoption event for local passionate dog lovers, and HSI will fly a small number of the dogs to the United States to help them find loving homes.

This shocking investigation takes place just two months ahead of China’s notorious dog meat festival in Yulin. Held every year on and around June 21st, the event in south China sees thousands of dogs and cats driven many miles across the country on the back of slaughter trucks, to be killed and eaten in the city of Yulin. A relatively recent invention, the festival was started in 2010 by dog meat traders as a way to boost their flagging sales. It’s a commercial enterprise presented to the world as a cultural event, but China’s animal activists are keen to set the record straight.

Mr. Tian says: “The world is being hoodwinked by Yulin’s dog meat traders. Their cruel event has no cultural heritage whatsoever, and has served only to tarnish China’s global reputation. No self-respecting person in China supports that bloodbath, it’s shameful.”

Download video and photos of the dogs rescued from slaughter: https://newsroom.humanesociety.org/fetcher/index.php?searchMerlin=1&searchBrightcove=1&submitted=1&mw=d&q=ChinaRescue0419