Home About Us News & Media Word is Spreading in Vietnam: Rhino 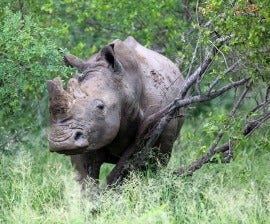 We’re working to save rhinos before they disappear. Vanessa Mignon

Demand for rhinoceros horn in Vietnam has decreased by 38 percent since the launch a year ago of a public education and awareness campaign jointly implemented by HSI and the Vietnam Convention on International Trade in Endangered Species of Wild Fauna and Flora (CITES) Management Authority, according to poll results released today.

CITES Parties had requested that the country—the world’s biggest consumer of rhino horn—implement a communication campaign to reduce demand for the substance, which is falsely believed by some to have medicinal properties.

Please donate to help us save rhinos and other wildlife.

The campaign focused on the capital city, Hanoi, and engaged stakeholder groups including the 800,000-member Hanoi Women’s Association, the business community, university students, school children, and the scientific community, as well as many leading health experts, to help spread messages against the use of rhino horns.

The young pupils received copies of HSI’s book, “I’m A Little Rhino,” as part of their curriculum. Advertisements also appeared on billboards within the city and at the airport, and on the sides of city busses. Campaign messages were further spread throughout Vietnam through hundreds of press articles.

Pre- and post-campaign polls conducted by the Vietnam office of the international public polling firm Nielsen revealed a dramatic reduction in public demand since the campaign’s inception:

Teresa M. Telecky, Ph.D., director of the wildlife department for HSI, said, “Insatiable demand for rhino horn is driving rhinos to the brink of extinction, so reducing that demand is absolutely crucial. These poll results demonstrate that, even in a relatively short period of time, our demand reduction campaign has succeeded in significantly and dramatically altering public perception and influenced behavior. The results offer a vital ray of hope for the survival of rhinos.” Please give to help us achieve more victories for animals.

Read the full press release.
View a PDF with photos and further details.