Home About Us News & Media Trump Administration urged to prote 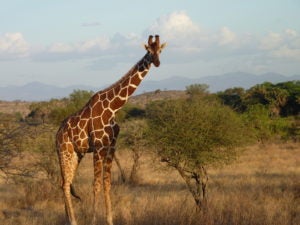 WASHINGTON—On World Giraffe Day, a coalition of conservation and animal-protection organizations will pressure the Trump administration to move forward with Endangered Species Act protection for giraffes.

In a letter to be delivered Friday, the groups document giraffes’ ongoing silent extinction. Submitted by the Center for Biological Diversity, Humane Society International, the Humane Society of the United States, International Fund for Animal Welfare and Natural Resources Defense Council, it urges the U.S. Fish and Wildlife Service to quickly propose protections for this rapidly declining species — a proposal that should have been made in 2018.

The letter follows a 2017 petition by the same groups to list the species under the Act. After the Fish and Wildlife Service failed to respond to the petition, several of the groups filed a lawsuit in December, prompting a response from Fish and Wildlife in April that giraffes may qualify for protection. Now the agency is undertaking a status review of the species and will propose protection if it deems that protection warranted.

“Under Endangered Species Act timelines, protection for giraffes is overdue, but slow federal action is contributing to their silent extinction,” said Adam Peyman, programs and operations manager for wildlife for Humane Society International. “We won’t give up on everyone’s favorite long-necked mammal. By next World Giraffe Day, we hope giraffes will have the protections they so desperately deserve.”

With now just under 97,000 animals, the African giraffe population has plunged nearly 40 percent in the past 30 years. The species is gravely imperiled by habitat loss and fragmentation, civil unrest and overhunting, as well as the international trade in bone carvings, skins and trophies.

“It’s shocking that there are now fewer giraffes in Africa than elephants,” said Tanya Sanerib, international legal director at the Center for Biological Diversity. “This World Giraffe Day we’re urging the public to stand with us in calling for Endangered Species Act protection for giraffes. These majestic animals deserve to remain wild and not be turned into trophies and trinkets for U.S. consumers.”

“It is clear that manmade causes are the driving force behind the alarming decline in the global population of giraffes. Ensuring swift action under the Endangered Species Act is an immediate and easily implementable first step to offering the key protections this species needs,” said Beth Allgood, U.S. director of the International Fund for Animal Welfare.

The public can support Endangered Species Act protection for giraffes by submitting comments.

“As giraffe numbers dwindle, we have to ask ourselves if the world needs them more galloping in the savannah or lying on someone’s floor as a rug. Giraffes are a beloved symbol of biodiversity, not trinkets or keepsakes. The clock is ticking as more and more of these animals are being killed while the administration delays its decision. If the animals are not protected under the Endangered Species Act, the Trump administration will be remembered for sitting idly by while one of the most recognizable species on the planet fades away,” said Elly Pepper, deputy director for international wildlife conservation at NRDC.

The IUCN currently recognizes one species of giraffes and nine subspecies: West African, Kordofan, Nubian, reticulated, Masai, Thornicroft’s, Rothchild’s, Angolan and South African. Legal protection is sought for the whole species. Further, parties to the Convention on International Trade in Endangered Species of Flora and Fauna (CITES) will consider a proposal to list giraffes under Appendix II of the Convention when they meet in August. If passed the proposal, which was submitted by the giraffe range states of Chad, Senegal, Niger, Mali and Kenya, would ensure the international trade in giraffe parts is tracked.