MONTREAL—The World Health Organization has published its report, WHO-convened Global Study of the Origins of SARS-CoV-2, and identified fur farming as an area of interest in the search for the origins of the coronavirus pandemic. The joint WHO-China study suggests that wild animals intensively bred on farms for fur fashion and other purposes could have become infected at the farms and then been transported to a wildlife wet market where the outbreak began.

Market traders in China display, sell and butcher a variety of wild and domestic animal species including mink, raccoon dogs and foxes, which are known to be susceptible to SARS viruses. Millions of these animals are farmed for fur in China and other regions, including Canada.

The report states that introduction through an intermediary host is considered to be “likely to very likely” as a possible pathway of emergence. One of the specific recommendations in the report calls for surveys for SARSr-CoVs in farmed wildlife that have the potential to be infected, including “those bred for fur such as mink and raccoon dogs in farms in China, in South-East Asia, and in other regions.” The report further noted “SARS-CoV-2 adapts relatively rapidly in susceptible animals (such as mink). The increasing number of animals shown to be susceptible to SARS-CoV-2 includes animals that are farmed in sufficient densities to allow potential for enzootic circulation.”

In 2018 (the most recent year for which data is available), over 1.7 million mink and over 2300 foxes were killed on Canadian fur farms. To date, there have been two COVID-19 outbreaks on factory fur farms in Canada, both occurring at mink farms in British Columbia.

Kelly Butler, wildlife campaign manager at Humane Society International/Canada, said: “We are calling on the BC government to take immediate action to end factory fur farming in British Columbia. These facilities cause horrendous animal suffering and were opposed by the vast majority of people in BC before they were exposed as reservoirs for COVID-19. Countries the world over are closing their factory fur farms in response to the grave public health and animal welfare threats they present. There is simply no excuse for the BC government to turn a blind eye to these tangible threats and allow these inhumane, dangerous and economically nonviable fur factories to continue to operate.”

Dr Peter Li, China policy expert at Humane Society International, said: “The WHO report provides a stark and sobering warning about the devastating public health risks of exploiting wild animals in unsanitary, overcrowded and inhumane factory farm systems be that bamboo rats and badgers for human consumption, pangolins for traditional medicine, or raccoon dogs and mink for fur fashion. Cramming millions of animals together in these abusive industries creates a perfect petri dish for pandemics, and unless we ban farming for fur and the wildlife trade, we will continue to play Russian roulette with global public safety.”

Download photos and video from the China fur farm investigation 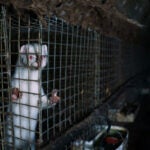 MONTREAL—In the wake of a COVID-19 outbreak among workers and animals at a factory fur farm in BC’s Fraser Valley,... 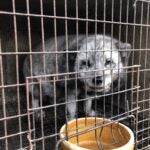 WASHINGTON— Disturbing video evidence of extreme animal suffering on multiple fur farms in China has been released by Humane Society...

Animal Suffering in the Fur Trade

Rabbits suffer and die to make frivolous keychains decorations. Although the fur industry does its best to keep the cruelty...