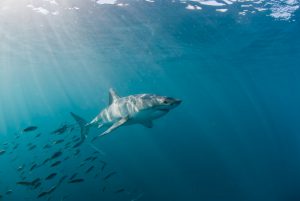 OTTAWA – Humane Society International/Canada is applauding a historic legislative victory for animals with the passage of Bill C-68, a government bill to amend the Fisheries Act. The legislation includes provisions banning shark finning in Canadian waters and prohibits the import and export of shark fins. The measures incorporate those of Bill S-238, the Ban on Shark Fin Importation and Exportation Act, which passed third reading in the Senate and second reading in the House of Commons.

Rebecca Aldworth, executive director of HSI/Canada, stated: “This decision marks a sea change for the welfare and conservation of sharks and is a victory all Canadians can be proud of. An estimated 100 million sharks are killed every year, largely for their fins, and Canada was a significant importer of shark fins. The extreme suffering of individual animals and the ecological devastation caused by this senseless practice is well documented. Our government has shown true leadership by responding to sound science and public will by ending Canada’s role in this cruel trade.”

Two iconic films, Sharkwater (2007) and Sharkwater Extinction (2018), from the late Canadian filmmaker Rob Stewart, brought the issue of shark finning to the world stage and helped to galvanize a global movement to stop the trade.

“Rob was a tireless advocate for sharks and the oceans,” said Stewart’s parents, Brian and Sandy Stewart. “He worked closely with Senator Michael MacDonald and MP Fin Donnelly early on to bring awareness to the shark fin trade and lobbied  for very necessary legislative action. As parents, we are so proud of Rob’s impact and contribution. We spent this past year bringing Rob’s final film, Sharkwater Extinction, to theatres around the world committed to continuing his vital mission. This bill is an example of the kind of change that Rob fought for every day and we know he would be ecstatic today. We applaud the Canadian government’s historic passing of Bill C-68 and will do our part to ensure it serves as a shining example for the USA and other countries around the world to follow our lead to protect sharks, the oceans and the planet.”

The Honourable Jonathan Wilkinson, Minister of Fisheries, Oceans, and the Canadian Coast Guard, stated: “There is no doubt that the illegal shark fin trade has had a devastating impact on global shark populations. In fact, over 63 million sharks are killed every year, many for the global shark fin trade. Bill C-68 responds to increasing public concern about the impact and the nature of the practice of shark finning that was generated thanks to the legacy of Rob Stewart and the Sharkwater Extinction film. I’m pleased to say that the Government of Canada shares these concerns regarding conservation and is stepping up and taking action to address this global issue.”

Fin Donnelly, MP for Port Moody—Coquitlam, stated: “Finally, we have legislation that is a victory for sharks and the health of the oceans. Since 2011, five bills have been introduced that would ban the importation of shark fins to Canada; in that time, nearly one billion sharks have been butchered and killed for their fins. With the passage of Bill C-68, Canada can play an important role in ending this destructive practice.”

Senator Michael MacDonald, sponsor of Bill S-238, stated: “Over the last decade, Canada has become the largest per capita importer of shark fins in the world, most of which are fins from threatened or endangered species. Banning the importation of shark fins is an important first step in the fight to preserve these important top predators.”

HSI/Canada has been at the forefront of a decade-long campaign to achieve a Canadian prohibition on shark fin trade. In that time, 19 Canadian municipalities prohibited the sale of shark products, while five federal bills and one provincial bill were introduced to ban trade in shark fins.

For photos and video: click here, and then select “create account” at the top of the page; fill out your information, and an administrator will approve you right away. If you encounter any difficulties, do not hesitate to reach out to the media contact below.

OTTAWA – Canada has passed the halfway mark in prohibiting the trade of shark fins with Member of Parliament Fin...

OTTAWA – Canada has reached the halfway mark in prohibiting the trade of shark fins with a final, sweeping endorsement...

Shark fin soup is cruel and wasteful. Chris Dascher/istock MONTREAL— Humane Society International/Canada is joining the family of the late...

HSI At an event held ahead of World Oceans Day (June 8), along with Lush Cosmetics and the family of...

Sharks: Dying for a Bowl of Soup

Every year, millions of sharks suffer painful deaths from the cruel and wasteful shark fin trade. Whether unintended “bycatch” by...

Questions and Answers on Shark Finning

What is shark finning? The word “finning” refers to the act of cutting off a shark’s fins and throwing the...