Call for a Bloodless Festival

At Gadhimai Temple in Nepal

Every five years, the world’s largest animal sacrifice takes place at the Gadhimai Temple in the Bara district of Nepal, about 200 km south of the capital, Kathmandu. Following a month-long celebration or “mela,” the festival culminates in the ritual slaughter of tens of thousands of animals. At its height in 2009, around 500,000 buffalo, goats, pigeons and other animals were slaughtered, but thanks to tireless efforts by Humane Society International/India and others including The Federation of Animal Welfare Nepal, Animal Welfare Network Nepal, and People for Animals, the gruesome event was considerably reduced in 2014 to around 30,000 animals.

In 2015, following rigorous negotiations and campaigning by Animal Welfare Network Nepal and HSI/India, the Gadhimai Temple Trust (officially called the Gadhimai Temple Operation and Development Committee) declared that animal sacrifice would be banned indefinitely at future festivals. However, despite the Temple Priest’s having confirmed the ban in a video statement, it would appear that the Temple has reneged on its promise to have a bloodless Gadhimai. Even with a ban being declared, it was limited to the slaughter of buffalo within the temple arena, and in reality, the idea of animal sacrifice is so ingrained in the minds of the millions of devotees that breaking that tradition even with the support of the Temple is extremely challenging.

In September 2019, the Supreme Court of Nepal ruled in favour of ending live animal sacrifice at the festival, directing the relevant agencies to create an action plan. This was followed in November by appeals against animal sacrifice issued by Nepal’s Ministry of Culture, Tourism & Civil Aviation, Ministry of Home Affairs, and the Ministry of Communication & Information Technology. These appeals followed a series of workshops and meetings between the government bodies and HSI/Nepal, FAWN, Jane Goodall Institute Nepal and others on the implementation of the Supreme Court ruling.

Over the past year leading up to the 2019 Gadhimai, HSI India and HSI Nepal have been hard at work negotiating with the Temple Trust and local officials, working with the Indo-Nepal border force who are ready to confiscate animals, and advancing a huge public awareness raising campaign to ensure that the estimated 5 million devotees attending the festival will hear the message not to bring animals but to bring flowers and seeds to offer to the goddess instead. HSI/India also joined with the Government of Uttar Pradesh and People for Animals earlier this year at the Kumbh Mela, the world’s largest religious congregation, to make attendees aware of the Gadhimal festival ban on animal sacrifice.

HSI/India, together with Bihar’s Animal Husbandry Department, People for Animals and local organization Jag Jagran Sansthan, conducted a series of colourful street theatre performances to promote the bloodless Gadhimai message. Our street theatre focused on the key districts of Bihar, via which the majority of devotees travel to Nepal for the festival. In addition to street theatre to reach remote and largely illiterate communities, HSI/India also conducted radio and online advertisements and billboards to raise public awareness in multiple languages and dialects.

HSI in Nepal and other animal welfare and multi-faith groups in Kathmandu work together to urge the government to ban religious animal sacrifice. Animal groups, students, teachers, lawyers, and artists all want to see an end to all animal sacrifice across religious, cultural, caste, ethnic and linguistic groups in Nepal. Together, we campaign for the national, provincial and local governments of Nepal to endorse and implement Nepal’s Animal Welfare Act ahead of the Gadhimai festival.

At the culmination of the event, water buffalo, goats, chickens, pigs, pigeons, ducks and rats are decapitated with blunt metal tools in an alcohol-fuelled killing frenzy. An estimated 70 percent of the animals have historically been imported across the border from India, enduring days of suffering without adequate food, water or shelter during transport. In 2014, HSI India successfully petitioned the Supreme Court of India to order a stop to these border crossings, resulting in thousands of animals being spared.

The origins of Gadhimai date back around 265 years, when the founder of the Gadhimai Temple, Bhagwan Chowdhary, had a dream that the goddess Gadhimai wanted blood in return for freeing him from prison, protecting him from evil and promising prosperity and power. The goddess asked for a human sacrifice, but Chowdhary successfully offered an animal instead, and this has been repeated every five years since.

Festival participants ring bells in prayer. The killing is meant to please the goddress Gadhimai, in hopes of having a wish granted or averting future calamity.

Help us call for a bloodless Gadhimai

As in years past, Humane Society International will be on the ground in Nepal to bear witness to this bloody spectacle to help increase pressure, and once again we are preparing to stand guard at the Indo-Nepal border to help officials as they stop animals being brought in, and to ensure that confiscated animals receive proper care. This is exhausting work in very challenging conditions. Please help by raising your voice with ours to urge the Prime Minister of Nepal to intervene and call for a bloodless Gadhimai. Take action right now.

Support our teams on their heartbreaking mission

We know our efforts have helped achieve a significant reduction in the killing, but Gadhimai remains a stomach-churning bloodbath that will be so distressing for our teams to witness. The festival site is also extremely unsanitary, with no toilet facilities for the millions of devotees who descend on the area on their pilgrimage, and the smell of faeces, death and blood filling the air after the sacrifice. Please take action to try to stop the killing andsign up to receive news and action alerts to learn more about what you can do to help animals.

Read a diary by our campaigners who attended the event in 2014, as published in The Guardian. 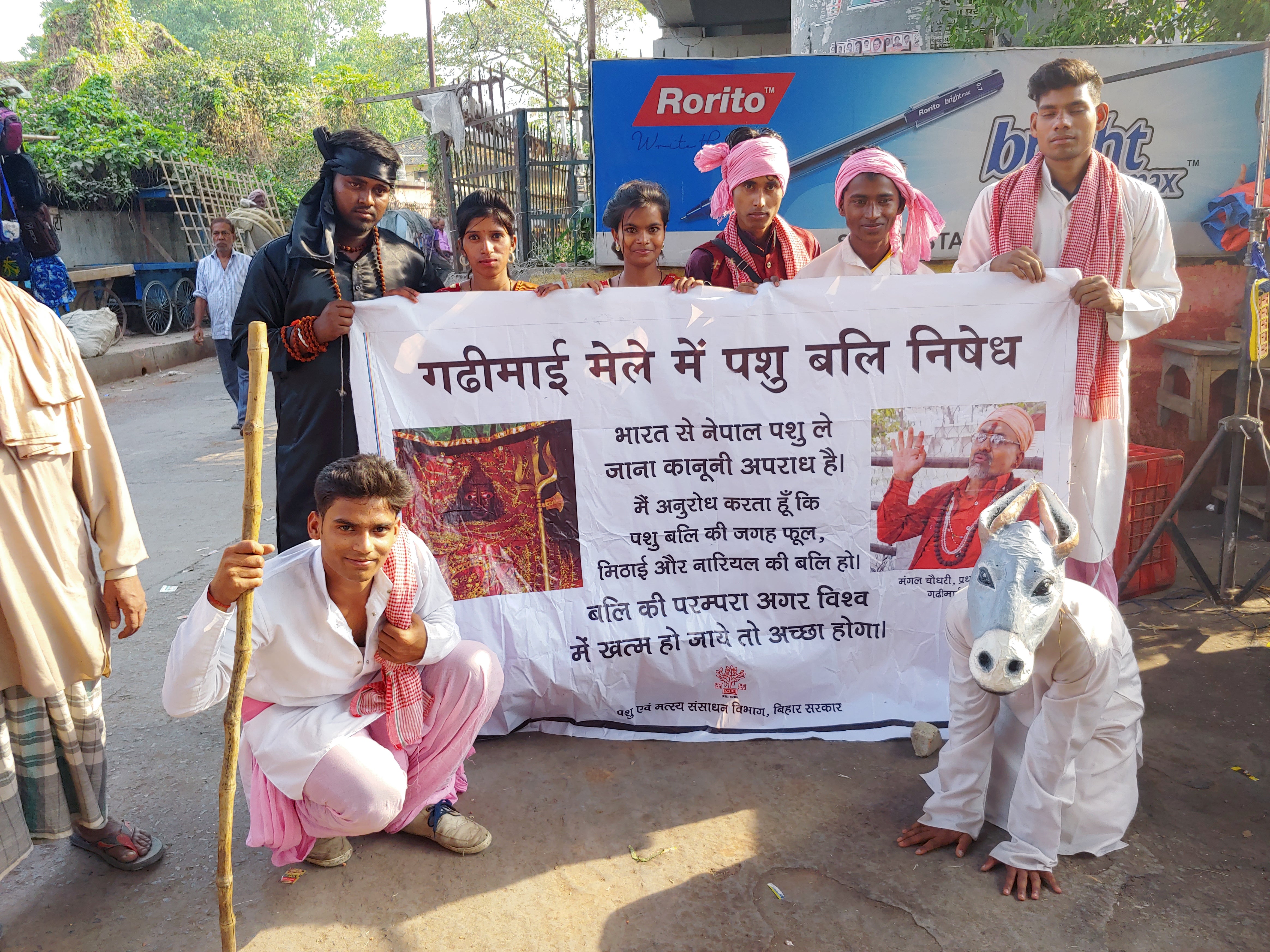 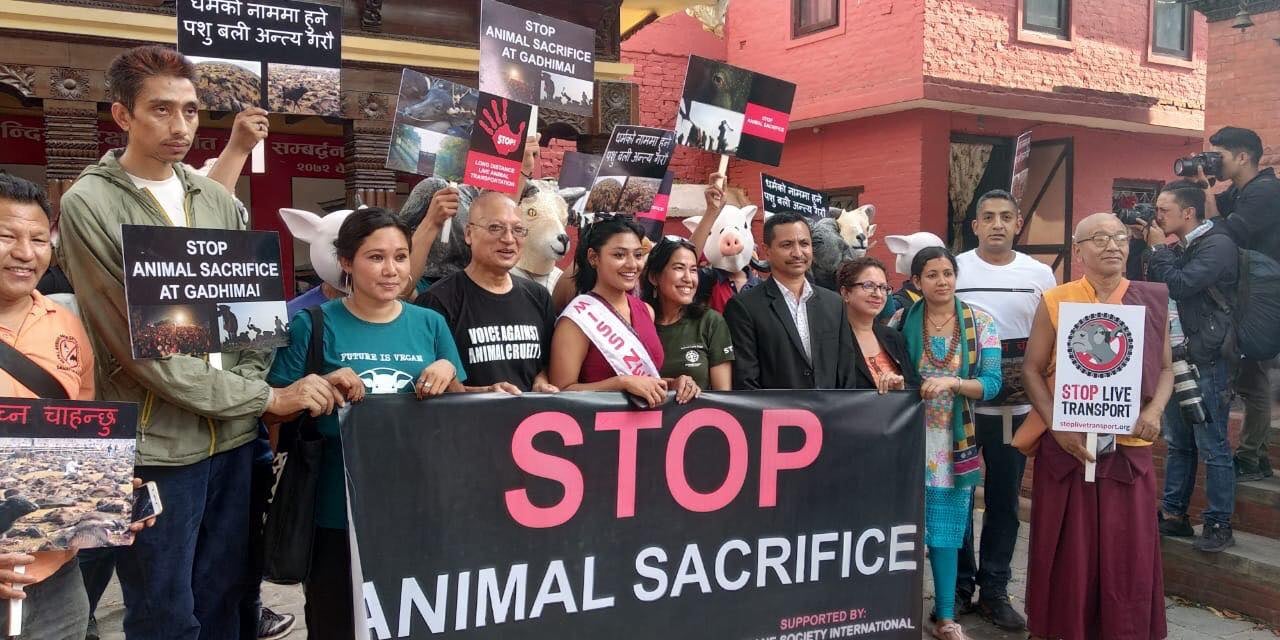 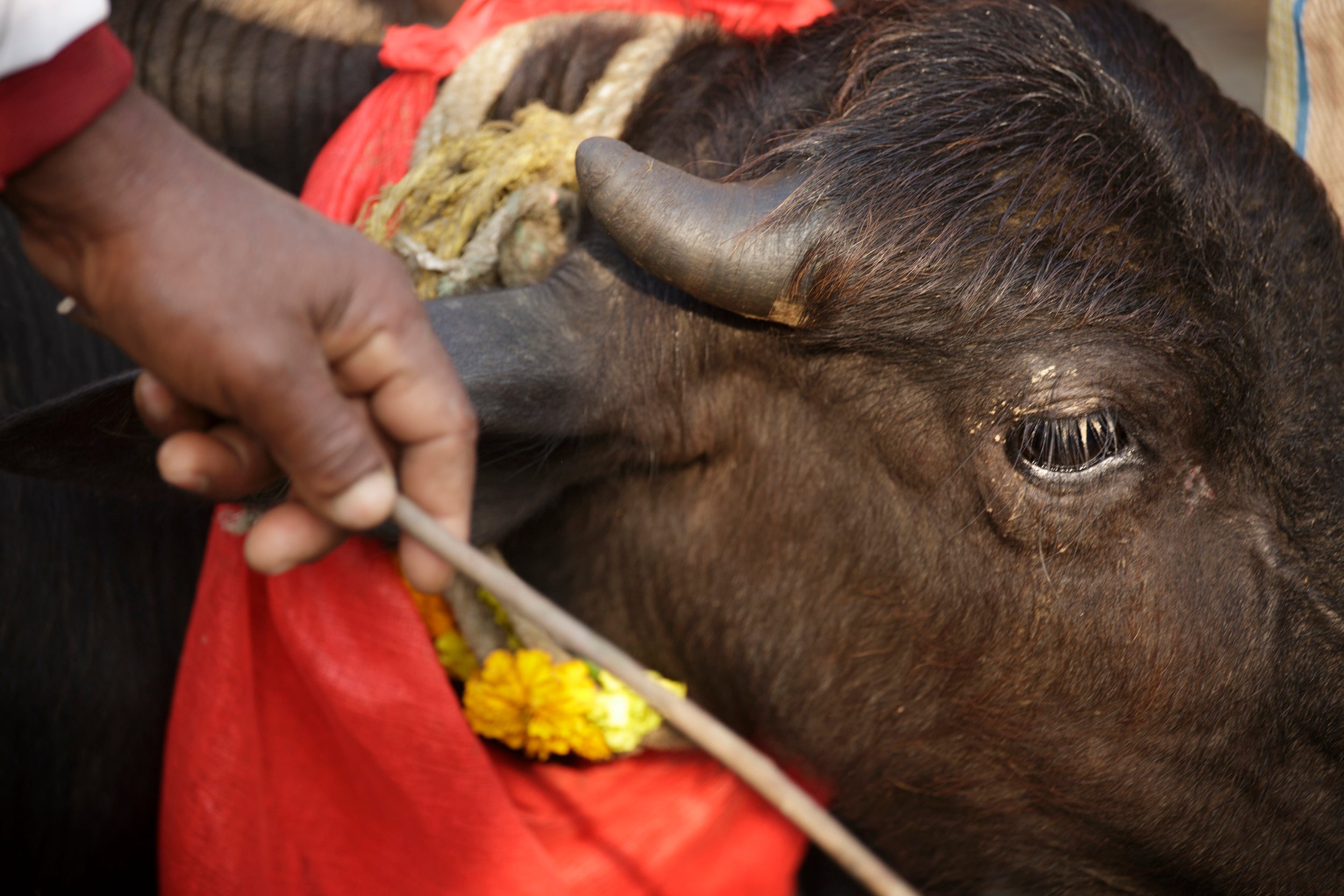 In 2014, HSI/India and AWNN's global campaign against the Gadhimai animal massacre captured the public imagination when thousands of national and international supporters expressed their ire and displeasure against the ruthless killing. Protests were held worldwide.