Shutting down a dog meat farm

Help dogs and other animals in need worldwide

Home Our Work Shutting down a dog meat farm

Our Animal Rescue Team has identified a dog meat farm in Haemi, South Korea, where 170+ dogs are suffering—locked away in tiny cages or confined to short chains, fated to be slaughtered for their meat. Please donate NOW to help us rescue these dogs and get them into new homes, transition other farms away from this sad industry, and fight animal cruelty worldwide.

big weird space gets left between

have no choice about this. too weird? 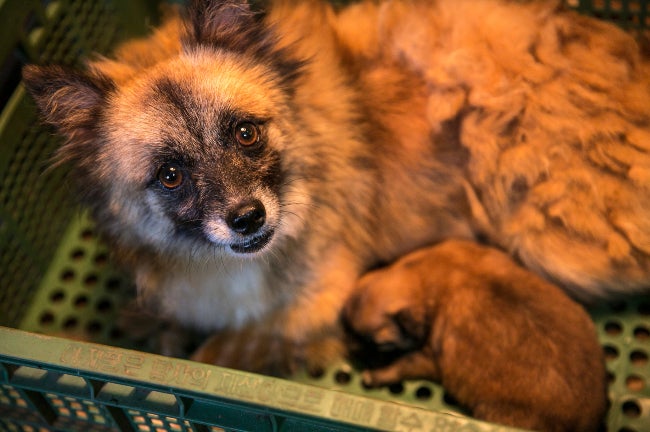 This farm houses many pregnant dogs and dogs with mange. Our staff who are heading to South Korea to rescue them will have to quarantine for 14 days on arrival.

One of the world’s leading animal protection charities, we are active in more than 50 countries, driving positive change for animals for almost 30 years. HSI is approved by the Better Business Bureau for all 20 standards for charity accountability. Through our rescue efforts, disaster response, veterinary clinics, and our work empowering local organizations, we serve a critical and expanding role in tackling animal suffering all over the world.

2. How is eating dog meat any different from eating cows, chickens, or other animals? Isn't this just a cultural thing?

HSI campaigns globally to address the cruelty related to the use of all animals for food, including cows, pigs and chickens. We expose and challenge farm animal suffering around the world, and through our Meatless Mondays campaign and Forward Food plant-based culinary training, we help individual consumers as well as huge corporations and catering companies, to reduce and replace meat and dairy. Our work in 2019 alone impacted 2.5 million meals globally. In countries like Indonesia and South Korea right now, there are undeniable socio-political circumstances in favor of ending the dog meat trade, and as campaigners, we cannot ignore the opportunity this creates to end the suffering for millions of animals.

Most people in South Korea do not regularly eat dog, and local opposition to the dog meat trade is increasing apace. So it’s important not to misrepresent this as a West versus East issue because that does an enormous disservice to the extremely vibrant campaign by South Koreans themselves for an end to the dog meat trade. In fact, the very idea that dog meat is “culture” is being robustly challenged by young South Korean themselves who find that concept insulting and demeaning, and who want a new culture of compassion. Change is coming from within South Korea and HSI supports that change, actively partnering with South Korean animal protection groups and working cooperatively with local campaigners.

We know that oftentimes, people relate more to dogs and cats because they have them as companions in their homes. But we also know that because of that human-animal bond, our dog meat campaign can motivate people to think about other animals like pigs, cows and chickens who also suffer for the food industry, and that can push people to make more compassionate food choices overall.

3. What happens to the dog meat farmer/farm; are they just going to open another farm?

HSI develops a legally binding agreement with each farmer to permanently close their dog farm and have the cages destroyed. That contract with the farmer also ensures they will never return to farming dogs or any other animals in the future. We develop a business plan with them to help them transition to a humane livelihood.

Shutting down a dog meat farm and bringing the dogs to safety in compliance with local and international law is a huge undertaking that requires substantial funding, planning and coordination. Thank you for your patience.

If you do adopt (or have adopted) a South Korea rescue dog, please tag us in a photo @hsiglobal on Facebook and Instagram!

5. Why do you transport the dogs overseas instead of adopting them out locally in South Korea?

Unfortunately, animal adoption isn’t common in South Korea. There are very few shelters, most of which are already overcrowded. In addition, there is a misconception among Koreans—perpetuated by dog meat traders—that “meat dogs” found on farms are somehow different from “pet dogs.” HSI is slowly changing this perspective by showcasing the countless adoptions of former meat dogs into loving families in the U.K., U.S. and Canada, and we hope to help encourage more of an adoption culture over time.

6. Other than farm closures, what else is HSI doing to end the dog meat trade?

We have a full and active campaign to end the dog meat trade across Asia that sees us work primarily in South Korea, China and Indonesia. We work closely with local governments, animal welfare organizations, media and celebrities to increase public awareness about key issues such as animal cruelty and threats to human health from the trade.

Within Indonesia, as part of the Dog Meat-Free Indonesia coalition, we have exposed the horrific cruelty of the trade including at live animal markets in North Sulawesi, and are actively working with local governments to crack down on the trade. Our ultimate goal is an Indonesia-wide ban.

In China, HSI is supporting numerous local animal welfare organizations in addressing the dog meat trade within their own country. Since August 2014, our partner groups have assisted the rescue of thousands of dogs and cats across China from large transport vehicles carrying hundreds of captured dogs in crowded cages to their deaths at slaughterhouses. Together with our partner groups Vshine and CAWA, we support two shelters in Dalian and Beijing where animal victims of the dog and cat meat trade can receive veterinary treatment and care.

In South Korea, our dog meat farm closures make the news headlines, helping expose the truth behind the trade and dispelling a strong misconception that there is a difference between a “pet dog” and a “meat dog.” All breeds are found on the farms and every one of them suffers the same and has the same capacity to be a loving, family companion when given the opportunity. Our farm closure models directly display a program that can be adopted by the Korean government to put an end to the trade for good. We’re optimistic that we can shut down this industry in South Korea and beyond within the next 10 years.

HSI is also an active member of the Asia Canine Protection Alliance, through which we are collaborating with local governments throughout Southeast Asia to implement or strengthen regulations to end the trade, raise awareness about the human health threats from the trade, and promoting humane dog management strategies and responsible companion animal care.

7. Why can't the person taking the pictures rescue the dogs / Why does it take so long?

The farmers allow our team to take photos of the dogs on the farm as part of our efforts to raise enough funds to shut down the farm, and they also allow us access at the same time to provide vaccinations required for the dogs’ travel. Shutting down the farm and bringing the dogs to safety in compliance with local and international law is a huge undertaking that requires substantial funding, planning and coordination, not least to find shelter partners in the receiving countries able to accommodate large volumes of dogs from overseas. Once identified, we assist the farmer with making improvements to the dogs’ living conditions. We perform random inspections to make sure the dogs are safe and well-fed, and that injuries and illnesses are being treated until we’ve established a concrete plan to transport the dogs to our Shelter and Rescue Partners.

8. Can I volunteer on the farm / Other than making a donation, how can I help?

Although we always appreciate the offer, we have a well-trained and experienced animal rescue team that specializes in the handling methods for dogs from these farms and similar situations, and for this reason we’re unable to accept the generous offers of volunteers to help with the South Korea rescues.

If you are unable to donate at this time, please know how important and appreciated your advocacy is to our organization. Please like our Facebook page, continue to sign our petitions, and share our posts on social media to participate in our collective effort to achieve change for animals.

As far as general ways to help, that anybody, in any location can do, please see our web page: 25 Actions to Help Animals and HSI.

9. How are my donations being used?

We are very careful in spending donations from our generous donors. We are accredited by the Better Business Bureau and score consistently high rankings across charity review sites. 85% of our funds go toward lifesaving animal protection programs, 10% toward fundraising and 5% toward administrative costs.

If you have any questions that weren’t answered above or by searching our website, please send an email to info@hsi.org and we will respond as soon as possible.

Shutting Down the Dog Meat Trade