LONDON—The much-anticipated release of Part 2 of the National Food Strategy (NFS), which recommends Brits cut back on meat by 30% over the next ten years, contains ‘bold, visionary and urgent’ recommendations that Government must act upon, says Humane Society International/UK.   The landmark report, commissioned by Government and led by Henry Dimbleby, has taken a comprehensive stance on the future of the UK’s food system, to help improve public health, combat climate change and restore biodiversity.

Warmly welcoming the report, HSI/UK applauds the NFS for acknowledging the detrimental role animal agriculture plays in damaging our health, and the health of our planet, and contributing to the suffering on millions of animals worldwide through the sale of intensively farmed animals to produce meat. The report comes just four months ahead of the UK hosting the United Nations Climate Change Conference (COP26) in Glasgow, where world leaders will discuss vital climate change mitigation strategies. HSI/UK urges the UK Government to seize this opportunity to show essential global leadership on transforming food systems to protect people, the planet and animals.

Claire Bass, executive director for Humane Society International/UK, responds to the report, saying: “The recommendations in the Food Strategy report are based on comprehensive science and it is imperative that the UK Government listens and acts decisively to wean the nation off the vast quantities of meat that are harming our health, our environment and causing immense suffering to billions of animals. Through HSI’s plant-based culinary chef trainings, working with huge multinational food service companies and university kitchens, we know that many businesses are already committed to increasing their meat-free and dairy-free options to meet growing consumer demand and reduce their climate impacts. If we are serious about avoiding climate catastrophe, we need politicians to own a meat reduction goal and strategy as a legitimate and essential component of tackling climate change, restoring biodiversity and ending the cruelty caused by factory farms. As UNFCCC COP26 hosts, this year is the UK’s moment to lead the way with a blueprint for a healthy, fair and sustainable food system for us all.”

There has never been a more fitting time for the launch of the report, as the UK eases out of its final stages of lockdown and looks toward restoring public health after the pandemic, in addition to hosting the world largest climate change conference in November this year. Reducing meat and dairy production and consumption is one of the most effective actions we can take to avoid catastrophic climate change. Animal agriculture, which breeds, raises and slaughters more than 88 billion animals worldwide per year, is responsible for a minimum of 14.5% of human induced greenhouse gas emissions globally—on par with all global transportation combined. Plant-centered diets also have many health benefits—studies show that people who eat fewer animal products have lower rates of a range of health issues including obesity, high blood pressure, diabetes and cancer. Poor diet currently contributes to an estimated 64,000 deaths every year in England.

Anticipating a negative reaction from some quarters about the prospect of reduced meat diets, HSI/UK responds that the transition away from meat-heavy meals is already well under way, with plant-based food options one of the biggest growth areas for supermarkets in recent years. The shift is also happening in the food service industry; HSI’s global Forward Food programme works with universities, food service providers and the largest caterers around the world to inspire and enable them to add more plants on plates. Since HSI/UK launched the program in 2016, Forward Food has been working together with universities across the country including Cambridge, Oxford, St. Andrews, Winchester, Portsmouth, London School of Economics and Political Science, City University, University of London, Swansea, Harper Adams, Central Lancashire, Oxford Brookes and Sheffield. Major British foodservice professionals such as Sodexo UK, Compass Group and Baxterstorey have also participated in the programme, and are setting ambitious meat reduction targets of their own.

The NFS report recommends ‘strengthening government procurement rules, to ensure that taxpayer money is spent on healthy and sustainable food,’ and HSI urges the House of Commons to be the first to lead by example in response to the NSF report, by overhauling its meat-heavy menus. A 2021 report by HSI/UK, shows that the overall procurement within House of Commons’ catering produces a carbon footprint of 376 tonnes CO2 equivalent per month, of which 72% is attributed to animal-based products such as meat, fish, eggs and dairy.  The report also revealed that by cutting meat and dairy on the menus by 50% and replacing them with plant-based alternatives, House of Commons Catering could save 115 tonnes of CO2-e per month, reducing its overall food GHG emissions by almost a third (31%).

Not only are plant-based products better for our health and the environment, but evidence shows it is becoming a good business decision too. By increasing the amount of climate-friendly food on offer, institutions noticed a sales spike of 41-79%. Plant-based food is going mainstream, with more and more supermarkets, restaurants and delivery food providers experiencing an increase in public demand for food that is better for our health, the planet and animals. The time is right to set the British blueprint for a sustainable food system.

Donate now to protect farm and other animals

EatKind for animals, people and the planet 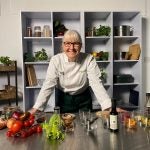 Ahead of COP26 where diet change should be discussed as a solution to climate change, HSI/UK launches virtual plant-based culinary programme to help add more plants to British plates

LONDON—As world leaders prepare to meet for the COP26 United Nations Climate Change Conference in Glasgow this November, to discuss...