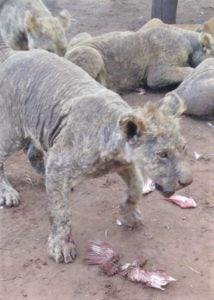 CAPE TOWN—Shocking photos from an anonymous source have revealed severely neglected lions covered in mange at a captive breeding facility in the North West Province of South Africa, providing a shocking insight into an industry that breeds an estimated 12,000 lions on approximately 200 farms across the country. Lion breeding farms in South Africa are part of what campaigners Humane Society International/Africa call the “snuggle scam” because they supply lion cub petting tourist attractions where visitors from around the world take selfies, oblivious to the suffering behind their holiday photos.

Upon investigation of the facility at Pienika Farm, officers at the National Society for the Prevention of Cruelty to Animals entered the property on the 11th April and discovered 108 neglected lions, as well as caracal, tigers, and leopards living in horrendous conditions. Humane Society International/Africa, which calls for an end to the captive lion breeding industry, praised NSPCA inspectors for their swift action.

The NSPCA’s senior inspector Douglas Wolhuter detailed how two lion cubs appeared to be suffering from a neurological condition and were found unable to walk. The cubs were confiscated for assessment and veterinary treatment by a specialist carnivore veterinarian. Wolhuter stated that, “Other issues such as small enclosures and inadequate shelter, no provision of water, overcrowding, and filthy and parasitic conditions were noted in the camps that contained the lions, caracals, tigers, and leopards. Twenty-seven of the lions had mange and the caracals were obese and unable to properly groom themselves.”

Photos of the lions show the animals almost entirely bald due to acute mange and poor, overcrowded living conditions.

Audrey Delsink, Wildlife Director of HSI/Africa, says: “South Africa’s captive lion breeding industry is a vicious cycle of exploitation, from cradle to grave. Lion cubs are ripped from their mothers at just a few days old, to be hand-reared by paying volunteers from countries around the world such as the United Kingdom, who are misled into believing the cubs are orphans. The cubs are exploited their whole lives, first as props by paying tourists looking for selfie shots whilst petting or bottle-feeding the animals, then later as part of “walking with lion” safaris. Once too big and dangerous for these activities, these lions are then killed for their bones which are exported to Asia for traditional medicines, or sold to be killed by trophy hunters largely from the United States in “canned” hunts in which hand-reared lions are shot in a fenced area from which they cannot escape.

As well as being barbaric and heartless, a lion colloquium (parliamentary conference) in August last year revealed that the captive breeding of lions is poorly regulated and fraught with welfare and ethical concerns. There is no better evidence of that than the atrocities discovered at the Pienika Farm.”

According to an article released on 4th May 2019, Pienika Farm is allegedly owned by South African Predator Association member and councilman, Mr Jan Steinman. SAPA has for years strongly supported South Africa’s captive lion breeding industry, and at the Portfolio Committee of Environmental Affairs during the Colloquium on the Captive Breeding of Lions in August 2018, SAPA President, Mr Kirsten Nematandani claimed that “SAPA sets very high standards for [its] members” and assured the PCEA that it had “implemented SAPA’s Norms and Standards [N&S] for Breeding and Hunting to make sure everything is above board”. And yet it would appear that one of SAPA’s own members could be in breach of several SAPA regulations including those regarding animal welfare, lion husbandry, minimum enclosure size, and the trade of lion products.

The NSPCA laid charges of contravention to the Animals Protections Act 71 of 1962 against Mr Steinman on May 2nd.

Karen Trendler, Manager NSPCA Wildlife Trade & Trafficking Portfolio, says: “The very fact that SAPA has included the word “undue” in its version of the Five Freedoms, an internationally accepted set of animal welfare guidelines, basically suggests that SAPA believes there are justifiable times for an animal to be hungry or thirsty, or suffer from fear, pain or disease, which is totally unacceptable in terms of animal welfare.”

The South African government sanctions the captive lion breeding industry and has established a quota for the international lion bone trade, despite growing global outrage.  A recent exposé by former Conservative Peer Lord Ashcroft of the United Kingdom revealed serious non-compliance issues regarding permitting and restricted activities (activities prohibited by provincial and national law) at South African breeding facilities, including alleged illegal “green-hunts” (where animals are darted with an immobilising agent as opposed to live ammunition) of lions, cross breeding of lions and tigers to produce larger offspring (ligers and tigons), and even plots to illegally export lion skins hidden in deer skin hides.

Audrey Delsink, HSI/Wildlife Director said “In the face of so much evidence supporting the significant welfare atrocities and illegal activities, and the bogus standards presented by the industry, the South African government cannot stand idle. We demand that the government shut down this industry once and for all; that is the only way brand South Africa can recover from this significant scourge.”

The eventual fate of the lions is uncertain and will depend on the outcome of the legal process. Even if the NSPCA is able to prove that the neglect was so severe as to justify confiscation of all the lions, there are no reputable facilities in South Africa able to immediately take in such a large number of lions.

Delsink says: “Caring for big cats requires really specialist expertise and facilities, as well as sufficient space. These animals can’t just be released into the wild as they’ve been captive bred and have no idea how to survive, plus if they are as sick as they appear, they’ll need veterinary treatment. There is sadly no quick fix to rehome more than 100 lions all at once. It’s an extremely sad situation, with these lions the innocent victims.”

Take action by signing our petition and request the South African government’s conservation authority to shut down captive breeding of predators. The horrors at Pienika Farm demonstrate that the provincial authorities are failing to regulate this industry in any way.

Read a blog entry about this by HSUS President & CEO Kitty Block.

Actress Pearl Thusi with a wild lion in the background at a protected reserve in South Africa. Audrey Delsink/HSI/Africa MEDIA...

The global trade in wildlife parts and products is hugely detrimental and many travelers unknowingly participate in this trade. Wildlife...