Home About Us News & Media Momentous decision by CITES to limi 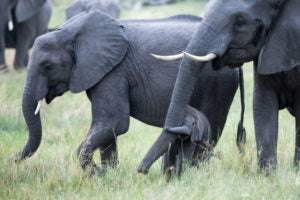 GENEVA—Wildlife experts from animal protection charity Humane Society International are celebrating a momentous win for elephants at the Conference of the Parties to the Convention on International Trade in Endangered Species of Wild Fauna and Flora (CITES), where delegates have just affirmed in plenary the decision to limit the controversial trade of wild-caught African elephants from Zimbabwe and Botswana to zoos

The European Union presented a series of amendments to last week’s decision which would allow trade of wild-caught elephants from Zimbabwe and Botswana to zoos only if approved by the CITES Animals Committee, in consultation with the IUCN African Elephant Specialist Group, an expert group that has publicly stated it does not believe there to be conservation benefits to wild caught elephants being sent to captive facilities. The amended text was passed by a vote of 87 in favour, 29 opposing and 25 abstaining.

Notably, the United States opposed both the original and amended proposal.

Audrey Delsink, wildlife director at Humane Society International/Africa says: “This is a momentous CITES decision for Africa’s elephants and despite compromised language being introduced by the EU, we are relieved by its passing. While it is disappointing that it is not an outright ban on trade in live elephants, the new language adds vital independent oversight and scrutiny. Speaking personally as an elephant field biologist I am jubilant that we have secured this victory for all the elephants who will now be spared the ordeal of being ripped away from their families. The capture of wild African elephants for export to zoos and other captive facilities is incredibly traumatizing for individual elephants as well as their social groups. Public sentiment is shifting, and people are increasingly outraged at the senseless and cruel practice of snatching baby elephants from the wild to live a life as a zoo exhibit.

“Countless elephant experts, animal lovers and celebrities from around the world urged countries to end this injustice by affirming the CITES ban, and we are so glad that our collective voices were heard. The definition of what is an appropriate destination is key, and the independent oversight by elephant specialists is critical, and so we will remain vigilant as that discussion develops, and fight against any attempts to justify or prolong trade in live baby elephants for captive purposes. We are extremely grateful to Kenya and the African Elephant Coalition for their efforts to protect wild African elephants.”

African elephants in Zimbabwe and Botswana are currently listed on Appendix II of CITES with an annotation that allows live elephants to be exported to “appropriate and acceptable” destinations. Under this definition, Zimbabwe has been capturing live baby African elephants in the wild and exporting them to zoos in China and elsewhere.

The practice has been highly controversial, drawing the condemnation of animal protection and conservation groups as well as elephant scientists who note that elephants are complex creatures who suffer both physically and psychologically as a result of captivity.

During the CITES conference, conservationist Dr Jane Goodall issued a statement of concern, and a host of celebrities such as Joanna Lumley, Ricky Gervais, Judi Dench, Pamela Anders and others submitted an open letter to European Union officials, calling on them not to oppose the CITES ban on trade in wild-caught baby African elephants ripped from their families and shipped off to foreign zoos.

Help protect elephants and other animals all over the world