MEXICO CITY—After two years of leading the fight to end cosmetic animal testing in Mexico, the #SeLibredeCrueldad campaign led by Humane Society International and joined by ONG Te Protejo, took to the streets with 1,000 cardboard bunnies today, to call on the public to support federal legislation to ban on this cruel and outdated practice.

By placing 1,000 cardboard rabbits at one of the most iconic landmarks in Mexico city – Plaza de la Republica – the event, aptly named “1,000 Rabbits demand that we #BeCrueltyFree” aims to illustrate that cosmetic animal testing is still legal in Mexico, while encouraging citizens to become aware that the practice is no longer necessary as there are thousands of safe ingredients as well as alternative tests which are cheaper and more reliable than animal testing.

Camila Cortínez, director of the NGO Te Protejo, mentions that this is a great opportunity for Mexico to consolidate itself as a country responsible for animals: “Mexican consumers are increasingly worried about the production policies of the products they acquire, and many of them prefer products that have not meant suffering in animals. Boosting a campaign like this is a big step in Mexico, and puts it at the forefront of progress in favor of animals.”

Mice, rats, rabbits and guinea pigs suffer through highly painful, distressing and stressful tests for cosmetic testing purposes. These tests frequently produce inaccurate or erroneous results, since they have an efficiency of 40 to 60%.

“I could not be more pleased to see Mexico move a step closer to becoming a cruelty-free beauty market. In 2019, with the vast array of established cosmetic ingredients and animal-free approaches to safety assessment, there’s simply no excuse to continue animal testing for cosmetics,” indicates Anton Aguilar, cirector of Humane Society International/Mexico.

Support the campaign by signing our global pledge to #BeCrueltyFree and help us end animal testing for cosmetics!

Be Cruelty Free is an international campaign coordinated by Humane Society International, which seeks to ban animal testing for cosmetics worldwide. To date, it has been possible to pass bills in 39 countries, among them the greatest achievement is the ban on the Euopean Union. Currently #BeCrueltyFree (by name in English) is working on seven parallel campaigns, including Mexico.

Humane Society International is a leading force for animal protection, with active programs in companion animals, wildlife and habitat protection, marine mammal preservation, farm animal welfare and animals in research. Humane Society International together with its partners, constitutes one of the world’s largest animal protection organizations. Celebrating animals and confronting cruelty worldwide &mdash; on the Web at hsi.org.

ONG Te Protejo is an organization that promotes the use of products not tested on animals in Latin America and other environmentally friendly and animal friendly initiatives. It works in four main areas: Information and consumer education, Mass dissemination events; Cruelty free brand certification; and Campaigns to impact Public Policies. 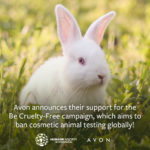 “It’s so important for everyone who cares about animals to choose products that are cruelty-free.” HSI/Mexico MEXICO CITY—Artist, actor and...