SEOUL—A new opinion poll in South Korea shows growing support for a ban on dog meat consumption, with 84% of those polled saying they don’t or won’t eat dog, and almost 60% supporting a legislative ban on the trade. The poll, conducted by Nielsen and commissioned by Humane Society International/Korea, is released on the day HSI/Korea rescues 170 dogs from a dog meat farm in Haemi, to seek new homes in the United States and Canada.

The 170 dogs rescued by HSI were kept in filthy cages on the dog meat farm until farmer Il-Hwan Kim asked HSI for help closing after 40 years in the dog meat business. This is the 17th dog farm permanently closed down by the animal protection group, and farmer Kim’s story is becoming increasingly familiar as the decline in popularity of dog meat in South Korea sees more farmers struggle to make a living. A further 26 dogs also headed to the United States to start a new life had been saved from the dog meat trade by HSI in previous rescue operations but had been unable to leave their South Korean temporary shelter until now due to COVID-19 travel restrictions. In total, HSI is taking 196 dog meat trade survivors out of South Korea on a single flight, including a poodle, Korean jindos and mastiffs, Pomeranians, terriers and a Labrador retriever.

Due to COVID-19 safety precautions, the rescue effort saw HSI’s U.S. team quarantine for two weeks at a government-sanctioned hotel in Seoul before being allowed to head to the dog meat farm to rescue the dogs. As dog adoption is not yet widely accepted in South Korea, HSI’s Shelter and Rescue partners in the United States and Canada will take the dogs and start the process of matching them with forever families. HSI hopes that its work to raise awareness about the benefits of adoption and promotion of its adoption success stories overseas, will gradually lead to more dogs finding forever families within the country.

Nara Kim, HSI/Korea’s dog meat campaign manager, says: “Every dog meat farm I’ve visited has a horrible stench of faeces and rotting food, but there is something different about this dog farm, it smells of death. The conditions are truly pitiful, and when we found these dogs they had looks of utter despair on their faces that will haunt us forever. Many of them are covered in painful sores and wounds from neglect, some have inflamed eyes and peer out blindly from their cage. I feel grateful they can no longer see this horrible place they live in, and when they finally receive veterinary care and can open their eyes, they will never have to endure this hopelessness again.”

As the Nielsen/HSI poll shows, most South Koreans do not consume dog meat, and a growing population see dogs only as companion animals. The suffering of dogs and the unsanitary conditions on meat farms has also received far greater visibility in South Korean media in recent times, with rescues by local Korean animal welfare groups and Humane Society International/Korea featured on prime time Korean TV, contributing to rising support for a ban on this cruel industry that keeps around 2 million dogs on thousands of farms in deprived conditions.

A study from the University of Glasgow published last year revealed that dogs on South Korean dog meat farms live with chronic cumulative stress, twice as high as pet dogs living in and around Seoul. Researchers examined levels of the stress hormone cortisol in dog hair samples, including from 63 dogs rescued from farms by Humane Society International. Cortisol is released into the bloodstream by the adrenal glands when the body perceives stress. In the short term this supports a “flight or fight” response, but when cortisol is elevated for long periods it can result in negative consequences including poor immune function, greater susceptibility to disease and decreased quality of life and welfare.

Nara Kim says: “More people in South Korea are interested in animal welfare and the environment, and so when they see footage of our dog farm closures on the news showing the animal suffering and filthy conditions, or read about dog meat exposés by other Korean groups, they are really shocked and upset. The inevitable drop in sales is leading more dog farmers to look for a way out, and right now HSI runs the only scheme in the country working in partnership with dog farmers to help them start a new life. But we hope in time the Korean government will adopt this type of approach to phase out the dog meat industry for good.”

Farmer Il-Hwan Kim says in the last 10 years business has been really bad. He says: “There is no future in dog meat at all, it’s already dying and will fall apart completely. And dog farming is physically hard and I’m getting old, so I want to get out. Forty years ago it was different, but now it’s over for dog farming. I might start work in construction, because I used to work in scaffolding and there are opportunities there.”

Download b-roll video and photos of the rescue here 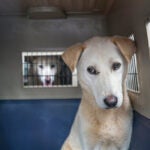 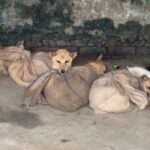 NEW DELHI—In a landmark decision, India’s Government of the state of Nagaland has ended the brutal dog meat trade. The... 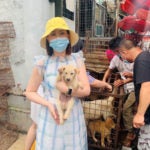 WASHINGTON—Just three weeks ahead of China’s infamous Yulin dog meat festival at which thousands of dogs are killed for consumption,...