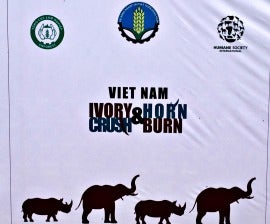 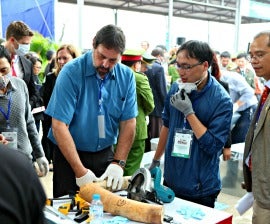 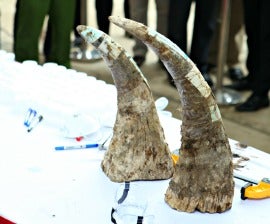 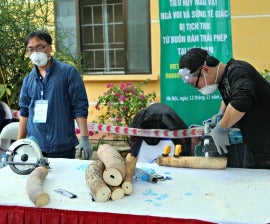 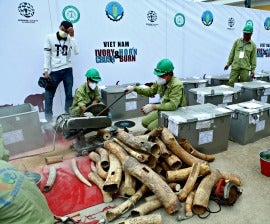 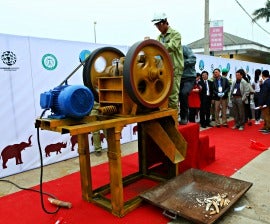 With elephants and rhinoceroses facing an increasing poaching crisis, Vietnam today destroyed 2,177.5 kg of elephant ivory, 70.1 kg of rhinoceros horns, together with a number of specimens from wild tiger and bear, that were confiscated from the illegal trade. The destroyed ivory and horn – estimated to be worth more than USD 7 million – came from the slaughter of an estimated 330 African elephants and 23 rhinos.

Vietnam, together with 20 other countries have also crushed or burned their seized ivory and rhino horn, sending a clear message to consumers and wildlife criminals that they will not tolerate poaching and trafficking that threaten to fuel transnational crime and cause the extinction of these iconic species.

The event took place ahead of the Hanoi Conference on Illegal Wildlife Trade on November 17/18 to be attended by His Royal Highness Prince William, Duke of Cambridge. Conference participants will call for tangible and unified action against illegal wildlife trade.”

Take the pledge to avoid contributing to wildlife suffering.

Ms. Ha Thi Tuyet Nga, director of the CITES Management Authority of Vietnam said: “Elephants are closely tied to certain communities in Vietnam, and Vietnam abhors the poaching and trafficking that is driving these beloved animals to extinction. We hope that today’s destruction event will convince citizens in Vietnam and around the world to stop buying ivory and rhino horn and instead lend their voices to the call to protect elephants and rhinoceroses in the wild.”

John E. Scanlon, Secretary General of the Convention on International Trade in Endangered Species of Wild Fauna and Flora (CITES), said: “The destruction of confiscated elephant ivory and rhino horn today in Vietnam is taking place just one month after the game-changing CITES CoP17 and right before the Hanoi Conference on Illegal Wildlife Trade. It serves to raise local, national and global awareness about the devastating impacts of illegal trade in elephant ivory and rhino horn and of the growing determination of Vietnam and clear commitment of the global community to put an end to it. The world hailed the bold decisions adopted at CoP17. It is now time for equally bold concrete actions to implement them.”

HSI has been working with the government of Vietnam since 2013 on a national, government-led campaign to reduce demand for rhino horn in the country. The multi-faceted campaign has reached an estimated 34 million people—approximately one third of the national population. According to national poll results, over the three years of the campaign, the percent of people who believe that rhino horn has medical value, and those who use and buy rhino horn, decreased significantly.

Teresa Telecky, Ph.D., director of the wildlife department for HSI, said: “Elephants and rhinos are dying at an alarming rate across Africa to feed demand for their tusks. We are immensely proud to have supported Vietnam’s first ever destruction of confiscated ivory and rhino horn, and hope that this will help to bring the plight of these iconic animals to the public’s attention and discourage them from buying ivory and rhino horn. The global community must come together to show that the world values living rhinos and elephants, not only their horns and tusks.”