LONDON—Israel has become the first country in the world to ban the sale of fur for frivolous fashion, effective 6 months from now, with a few exceptions. Humane Society International/UK, which leads the #FurFreeBritain campaign for a UK fur sales ban, hopes Israel’s ban will inspire the British government to follow its lead and also ban fur sales, a move supported by 72% of Brits in recent YouGov and Yonder opinion polls. The UK was the first country in the world to ban the fur farming in 2003, but the import and sale of fur is still allowed. The UK government has launched a Call for Evidence to consider the case for a ban.

Israel’s ban allows exemptions for the use of fur in ‘scientific research, education or instruction, and for religious purposes or tradition.’ This would, for example, permit the sale of shtreimels—fur hats traditionally worn on Shabbat and holidays by Orthodox men. A similar exemption exists in the US state of California where fur sales were banned in 2019. HSI/UK believes a UK fur sales ban would mirror those exemptions, but nonetheless still end the suffering of millions of animals whose fur is imported to the UK from fur farms overseas.

Claire Bass, executive director of Humane Society International/UK, said: “This is a truly historic day for animal protection, with Israel becoming the first country in the world to ban the sale of fur fashion. Even with the exemption for traditional dress, without which this ban was unlikely to have succeeded, Israel’s fur ban will save the lives of millions of animals suffering on fur farms or languishing in cruel traps around the world, and it sends a clear message that fur is unethical, unnecessary and outdated. We now call on the British government to follow Israel’s compassionate lead and implement a UK fur import and sales ban once DEFRA’s Call for Evidence is completed. For as long as the UK remains open for business to sell fur that we deemed too cruel to farm here two decades ago, we are complicit in this cruelty.”

Environmental protection minister, Gila Gamliel, passed the ban into law, and issued a statement after signing the regulations: “The fur industry causes the deaths of hundreds of millions of animals worldwide, and inflicts indescribable cruelty and suffering. Using the skin and fur of wildlife for the fashion industry is immoral and is certainly unnecessary. Animal fur coats cannot cover the brutal murder industry that makes them. Signing these regulations will make the Israeli fashion market more environmentally friendly and far kinder to animals.”

Jane Halevy, founder of the International Anti-Fur Coalition (IAFC) which has been working towards the ban for over a decade, said: “The IAFC has promoted a bill to ban the sale of fur in Israel since 2009, and we applaud the Israeli government for finally taking the historic leap towards making fur for fashion history. All animals suffer horrifically at the hands of this cruel and backwards industry. Nothing is stronger than an idea whose time has come. Killing animals for fur should become illegal everywhere – it is high time that governments worldwide ban the sale of fur.”

Fur farming has been banned across the UK since 2003, and has been prohibited and/or is in the process of being phased-out in numerous European nations such as Austria, Belgium, Bosnia-Herzegovina, the Czech Republic, Croatia, Macedonia, the Netherlands, Norway, Luxembourg, Serbia, Slovakia and Slovenia. Most recently the parliament in Estonia voted in favour of a fur farming ban, Hungary declared a ban on the farming of animals including mink and foxes, in France politicians are currently debating a ban on mink fur farming and the Irish government has made a commitment to bring forward legislation in 2021.

Views around fur have changed rapidly in recent years, with more and more fashion designers, including Gucci, Prada, Chanel, Burberry, Versace and Armani, adopting fur-free policies, and the majority of UK high street shops being proudly fur free. A 2020 YouGov opinion poll, commissioned by HSI/UK, also reveals that 93% of the British population reject wearing real animal fur, and the majority (72%) support a ban on the sale of fur in the UK. A 2021 Yonder opinion poll confirmed that 72% of Brits would support a UK fur import and sales ban. Along with British citizens, animal protection groups, local celebrities, cross-party politicians, and even the former CEO of the British Fur Trade Association have pledged their support for a #FurFreeBritain.

In the United States, California became the first US state to ban fur sales in 2019 following similar bans in cities including Los Angeles, San Francisco, Berkeley and West Hollywood. In 2020, legislators in Hawaii and Rhode Island introduced fur sales ban proposals, as have cities in Minnesota and Massachusetts. 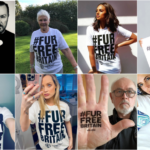 Fur Farming in the European Union

Mink. Tom Tietz The European Union is one of the world’s largest producers of factory farmed fur. In 2015 alone,...